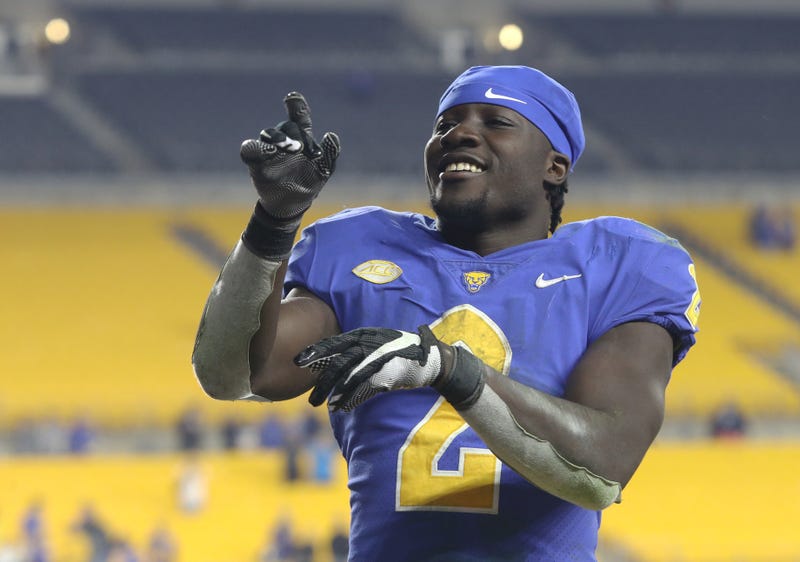 PITTSBURGH (93.7 The Fan) – A dozen Pitt Panthers honored as All-ACC selections on Tuesday including four on the first team.

RB Israel Abanikanda-the junior from Brooklyn broke Tony Dorsett’s single-game rushing record and tied a long-time record with six rushing touchdowns in a game. He also won the ACC rushing title by 439 yards and had six more rushing touchdowns than anyone in the league.

DL Calijah Kancey-a finalist for the Outland Trophy and the Bronko Nagurski Award, the senior is second in the ACC with 14.5 tackles for loss as an interior lineman.
It’s the second consecutive season Kancey is 1st Team All-ACC.

LB SirVocea Dennis-the only underclassman captain, led Pitt with 92 tackles, adding 12 tackles for loss, seven sacks, two forced fumbles and an interception. It was a progression for the junior, going from 3rd Team to 2nd team to 1st team this season.

WR Jared Wayne-coming off a career-high 199 yards receiving against Miami, the Canadian finished with 1,006 yards, third in the ACC.

CB MJ Devonshire-the Aliquippa star started the second with a game-winning interception return against West Virginia. He also had a Pick Six against Virginia. He leads the ACC with a 9.9 punt return average including a touchdown.

C/G Jake Kradel-the senior from Butler split his starts between the two positions seamlessly taking over for the injured Owen Drexel. Kradel named All-ACC at guard and Honorable Mention at center.

OT Matt Goncalves-the versatile junior played in all 12 games this season and started at both left and right tackle during his Pitt career.

DE Deslin Alexandre-the second consecutive year to be honored, the senior finished with 29 tackles, 6.5 for loss, 5.5 sacks and eight QB hurries. He also established the 5th Down Campaign to raise money for kids in his native Haiti.

CB Marquis Williams-had the second Panthers a Pick Six against Virginia along with an interception against Western Michigan. The senior forced a fumble and finished the regular season with 23 tackles.