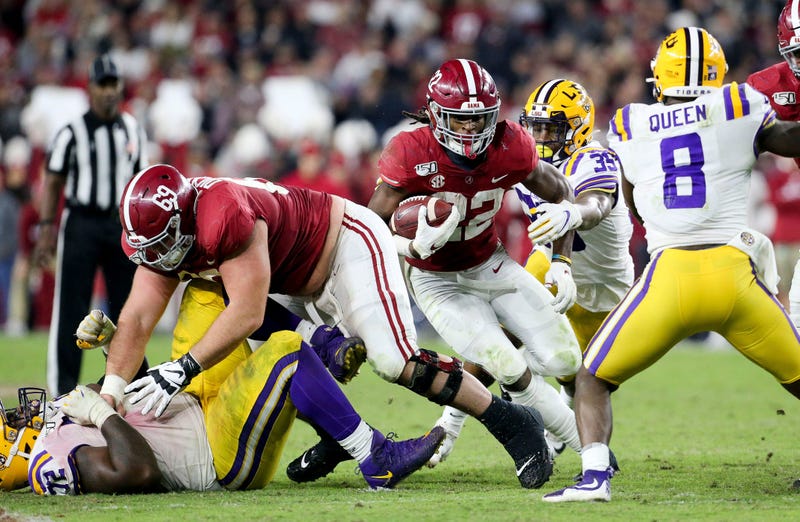 Audacy NFL Draft Analyst Brian Baldinger joined Andrew Fillipponi, Chris Mueller and Arthur Moats on The PM Team Tuesday and gushed over a pair Alabama prospects the Steelers could have their eyes on.

One of the most popular players projected to Pittsburgh over recent months has been Crimson Tide running back Najee Harris, who reminds Baldinger of a recent Steelers great at the position.

“He reminds me of Le’Veon Bell when he came out of Michigan State,” he said. “He was a great receiver, great route runner. Obviously ran the ball really well for five or six years in Pittsburgh. And I think Najee’s very similar to that.

Baldinger also dismissed Chris’ take from last week that Harris is destined to be Eddie Lacy 2.0.

“I don’t see Najee Harris being that guy and he catches the ball way better than Eddie Lacy ever caught it,” he added.

But Harris is not the only Alabama product Baldinger is high on, as he also spoke glowingly about center Landon Dickerson, who the Steeler could also target with the No. 24 pick.

“There’s no better lineman in this draft than Landon Dickerson,” Baldinger said. “I mean he’s a massive guy. The Steelers, nobody has produced centers like the Steelers have. If you want to produce the next great Steelers center, look at Landon Dickerson.”

While Dickerson’s tapes is undoubtedly impressive, Baldinger fell in love with his intangibles.

“He changed that whole culture at Alabama,” he said. “Nasty.
I mean, drives your bucket right into the dirt, makes you eat some grass.
Powerful guy, massive and just a great teammate.”

Still, there are concerns about Dickerson’s health. He has suffered multiple knee injuries over his playing career already, including a torn ACL in the 2020 SEC Championship game. Baldinger is aware of the injury history, but not necessarily concerned.

“I understand some teams might just take him off the board and just eliminate the temptation, but I wouldn’t be one of those teams.” he said. “I’d investigate. I’d put him through a series of battery of tests and all that. I’d do everything I could to get him on my football team.”