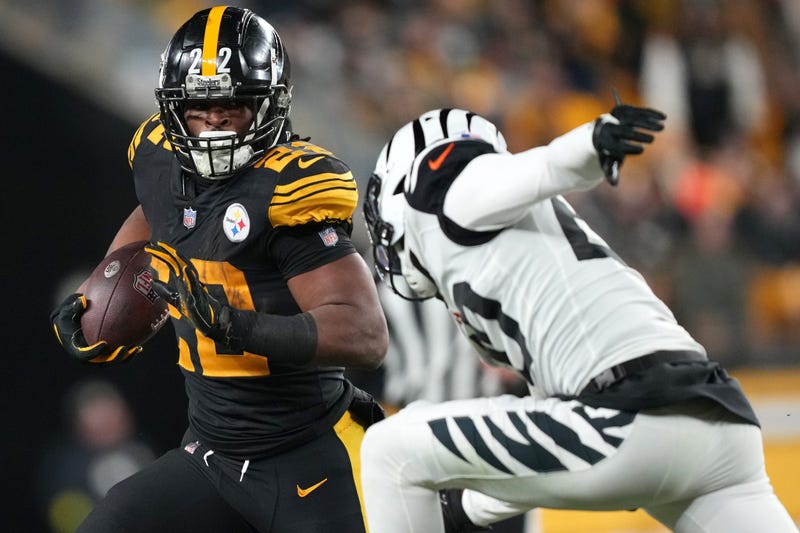 PITTSBURGH (93.7 The Fan) – Rushing for 189 yards in the last two games, Najee Harris says the Steelers running game is heading in the right direction. If you are wondering about Monday Night Football, this might be a good sign.

“I like playing on turf better,” Harris said Friday. “At Alabama, we called the Mercedes Benz Stadium (home of the ACC Championship Game), because we played there a lot, we called it a home game. For me to play in another indoor stadium takes me back to college where I loved playing indoors.”

As a senior in the ACC title game against Florida, Harris rushed for 178 yards and a pair of touchdowns. He caught five passes for 67 yards and three more touchdowns. Beyond the obvious weather advantages, Najee explained why he likes artificial turf over natural grass.

“Obviously, I’m a bigger guy so I put a lot more force in the ground when I cut,” Harris said. “Sometimes in the grass, it’s dirt and I slip a little bit outside. Our grass out there is not good, you see us slipping every day in practice. When it’s in the turf, I just like it more personally.”

Overall Harris said the run game is something they focused on since the bye week. He said they all took their struggles to heart and still have room to grow. The second-year tailback also said it comes down to being the more physical team.

“We know that you guys know our tendencies, now it just comes down to are our bigs being better than your bigs,” Harris said. “It’s the competitive native the Steelers organization has, and has had for years, to run the ball on obvious downs. That’s their nature.”

Najee Harris has been focusing on getting the ground game going and not too much about what is going on around the NFL. He was asked what he thought about the Colts hiring Jeff Saturday.

“I don’t really know,” Harris said. “I didn’t know about the coaching staff. I heard about it. Where did he come from?”

“Oh really, is this is first year coaching?”

“That’s dope, congratulations to him.”

“They are a really good team. They are going in the right direction. They are leaning on Jonathan (Taylor) a lot more these last two games. You can see what they are going to do. It’s going to be a physical game.”

On Thursday, rookie receiver George Pickens said he was helped in college practicing against first-round picks on the Georgia defense. Harris was asked if he had a similar experience at Alabama.

“I’m going to talk a little @&#$, Georgia, their staff came from Alabama,” Harris said. “Their whole stuff is from us. He got that from us, they are following the leader. They got their weak-ass natty (national championship).”

“I played against Minkah. I played against Levi (Wallace). I played a couple of first-rounders. Minkah is a good mentor for me. Obviously, they have great defensive players to come out of Georgia.  All the way back when I was a freshman, who was that linebacker from Chicago?”