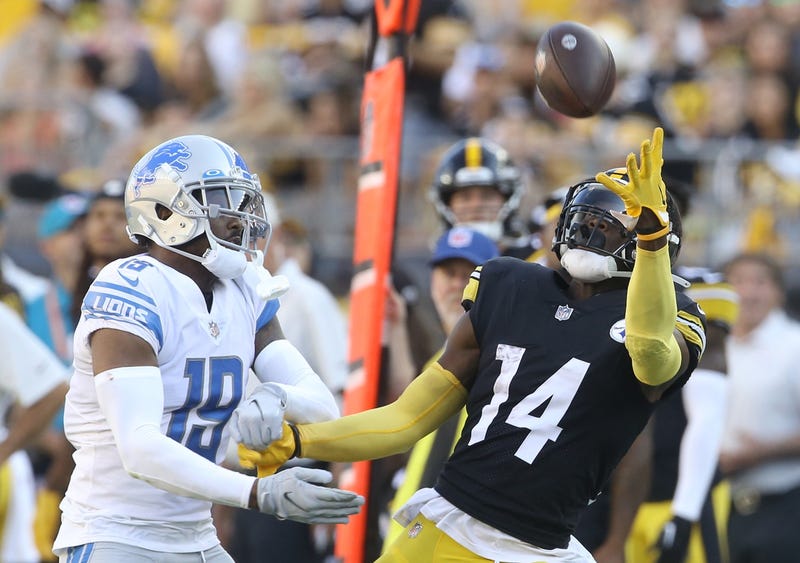 PITTSBURGH (93.7 The Fan) – No rookie, probably no player, was talked about more or anticipated more this season than George Pickens. The 6’3” receiver from Georgia was nationally being discussed as a Rookie of the Year candidate. After two weeks, Pickens is 185th in the NFL in receptions.

He says every receiver wants the ball and believes he’s open 90% of the time noting his 4.4 speed gives him an immediate advantage.  Offensive Coordinator Matt Canada chuckled when presented with that number, saying he would let that 90% claim lie.  Pickens said he’s not the only one finding holes in defenses.

He believes it’s a chain of events as to why he hasn’t gotten more than the two receptions on six targets.  What he means is sometimes it’s the timing of the play, the time the quarterback has, the play call itself.  Pickens calls it a whole team collective as to why they haven’t been more effective downfield.

He said he would love to have an opportunity like the Patriots Nelson Agholor had against Ahkello Witherspoon.  Just a one-on-one fly pattern that Agholor went up and made a play on.  All camp where Pickens started to make his name was winning one-on-one battles, on short and long routes.

It’s not like Pickens doesn’t believe it will happen.

“That’s the good thing about football, every play is different,” Pickens said.  “It’s based on plays.  If we had a game today, someone could catch a 90-yard bomb.  On one play, everyone is excited again.”

“It can happen at any time.  You just have to keep going.  It’s like a book, you feel that climax.  It’s one day is bad, one day is good.”

He admits there will be a challenge to make changes in a short week, but there are a lot of games to be played and a lot of practice time left.  He won’t let one or two games define him or them.

“I would love to get George more involved,” said Steelers Offensive Coordinator Matt Canada.  “I could say the same thing for all of them.  We got to continue to stay on the field and get the right guys the ball.  Bottom line we have to score touchdowns.”

Diontae Johnson has been through the frustrations.  He’s hoping for more from the offense as well and also working with Pickens.

“He’s growing daily,” Johnson said.  “He’s trying to learn.  I’m in his corner helping him out, getting him through those days.  He’s frustrated, he’s feeling some type of way about certain plays.  I’m that person there for him.  Helping him out and getting through it.”

“I feel like he’s going to be fine.  It’s a long season, so he has plenty of more chances to make plays.”