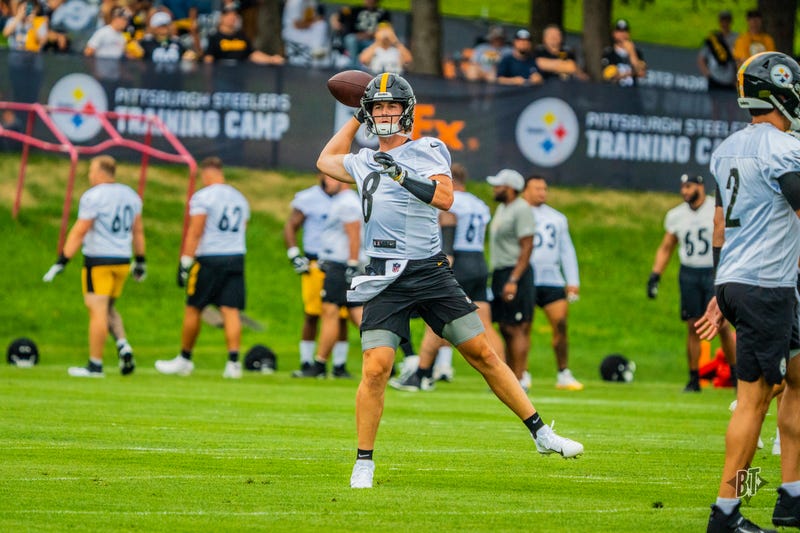 LATROBE, PA (93.7 The Fan) – Kenny Pickett continuing to take the second team reps probably was the biggest storyline on one of the least newsworthy days of Steelers training camp. There is only one more practice at St. Vincent College and Wednesday they weren’t in full days, hence no hitting.

“His preparation more than anything,” Head Coach Mike Tomlin said of Pickett’s recent performances.  “He’s going to get some reps in more varsity-like action in this game in a effort to get to know him and see how he fares.  What he’s doing out here is just preparing for it.”

Looks like Pickett will get some run with the first team or at least more starters against Jacksonville on Saturday night.

There were no 7-Shots, goal line, two-minute or third down drills Wednesday. Here are a few of the highlights from the full team work
·     Mason Rudolph had the prettiest pass, a perfect bomb to Cody White of about 35-40 yards. He also threw a nice seam route to Connor Heyward and a pump fake to Miles Boykin. Rudolph had the crowd cheering for him.
·     Pickett and Gunner Olszewski hooked up a half-a-dozen times including a pump fake of a short route, Gunner took off and rolling to his left Pickett floated one perfectly in stride down field.
·     Mitch Trubisky threw a good seam route to Heyward and cross to Pat Freiermuth, but also had a ball tipped at the line by Cam Heyward and the only interception of the day, Robert Spillane ran in front reminiscent of his Pick 6 against Baltimore.
·     Kendrick Green got more work with the first team at left guard on Wednesday. Kevin Dotson did sub in later. 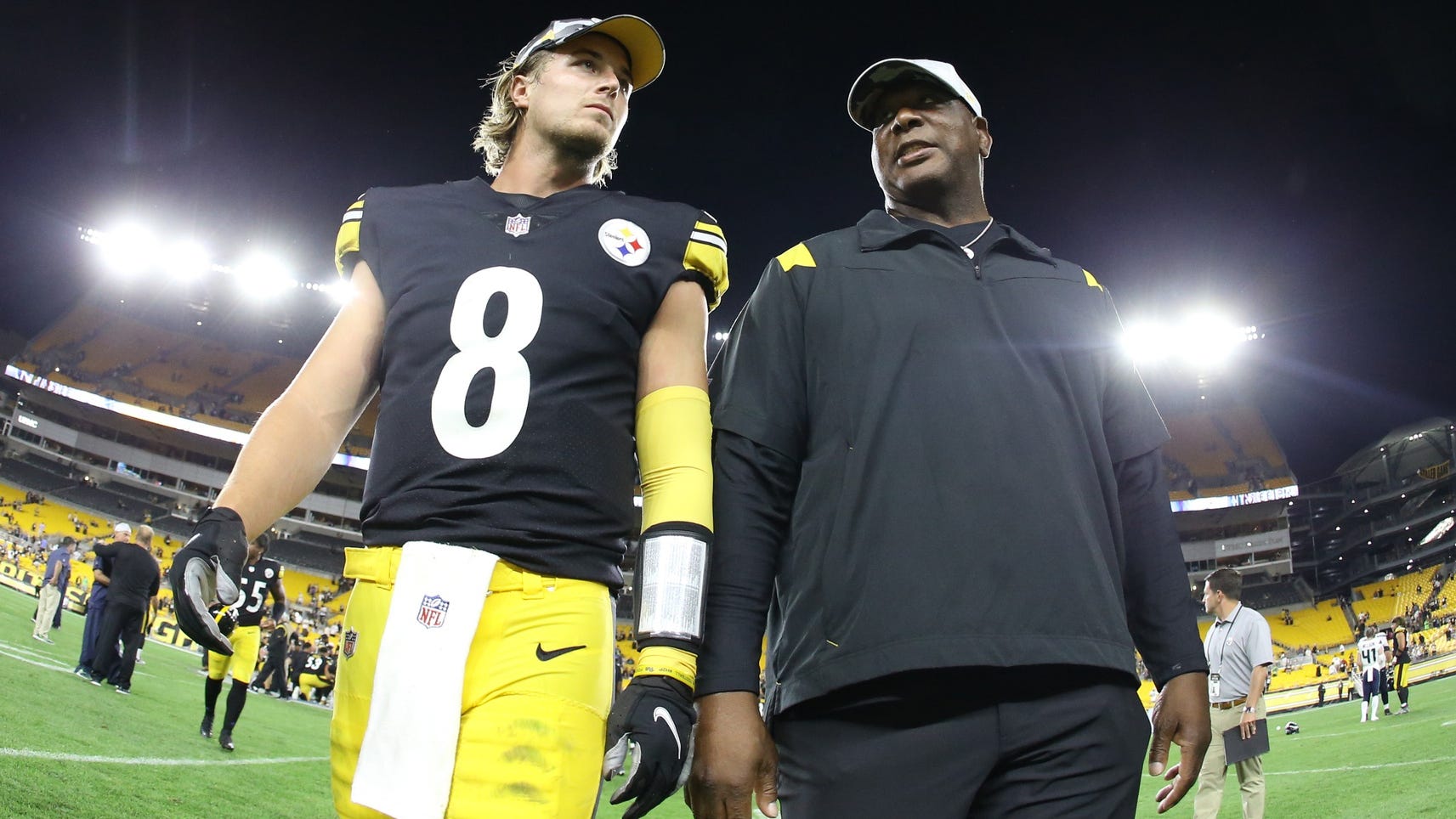 Undrafted rookie Jaylen Warren ran more first-team reps than any other tailback.  He also continued to carry the football nicknamed ‘Jaylen’s baby’ around with him everywhere at camp.

“They all do, that’s standard operating procedure,” Tomlin said of that practice.  “Every back in our group does that.  That is nothing new there, that is part of our culture.”

#Steelers rookie RB Jaylen Warren, since fumbling Saturday night, has been carrying a football with him everywhere he goes. @937theFan pic.twitter.com/RbMDD6ON3g

The preparation for the preseason games intensifying as Tomlin started to work scout teams of what the Jags do.

“Working hard units in preparation for Jacksonville, we think that’s appropriate,” Tomlin said. “We’re excited about taking the next step in development, a little more game planning, going on the road, being in some of the environmental challenges that come with that.”

“Jacksonville has been in one additional stadium and so they're a week further down the line in terms of collective maturity or development, and that’s exciting. We look forward to measuring ourselves against that and them in that environment. That’s probably our mentality as we lean in on the rest of the week. Starting to prepare for that and provide more detail and depth to our planning.

“So, from that perspective it was a good day. We’ve got more work ahead of us tonight in the classroom and we’ll continue to do similar things tomorrow.” 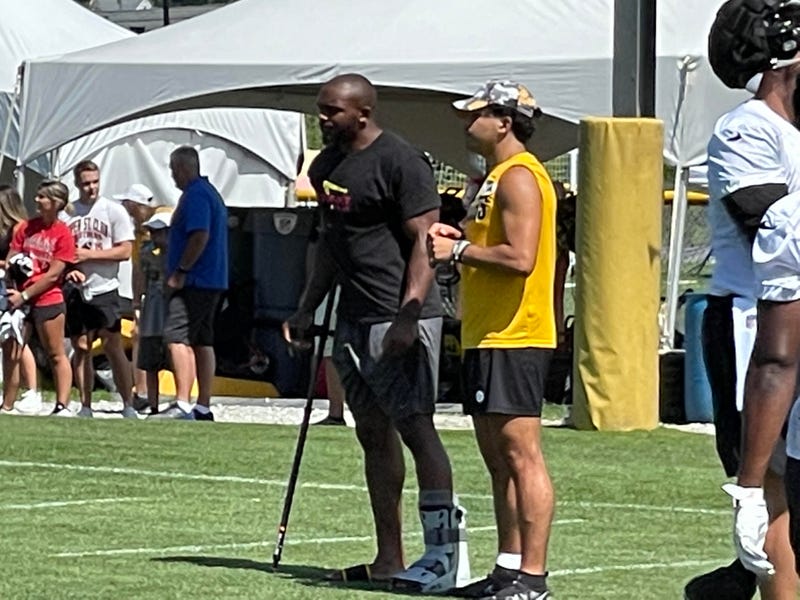 Defensive lineman Isaiahh Loudermilk wasn’t able to finish practice due to ‘a rib injury of some kind’.  Tomlin said no one took a step back from an injury standpoint as most of the starters practiced with the exception of LB Alex Highsmith.  RB Master Teague was not in uniform and on the sidelines with a crutch and a walking boot for his injured foot.

Those who did not practice in team drills, but were dressed-WR Calvin Austin, DL Montravious Adams, LB Marcus Allen, FB Derek Watt and DB Arthur Maulet.

The final day of open practice for the season is Thursday afternoon at 1:55. Good chance even with a game on Saturday for them to be in full pads to end their time at St. Vincent College.