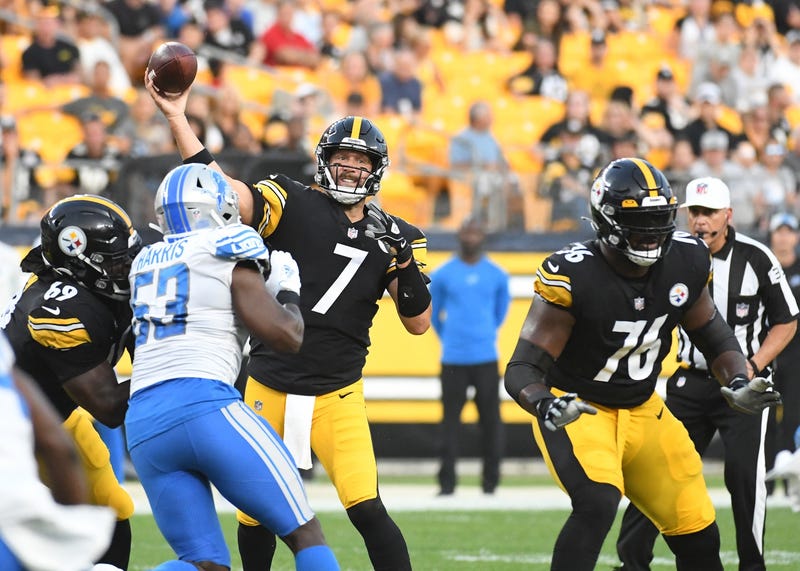 PITTSBURGH (93.7 The Fan) – Lost in most of the conversations about TJ Watt and Ben Roethlisberger support for his teammate. Roethlisberger saying he believes in his offensive line, he admits there will be ‘growing pains’.

“I miss all those guys up front, obviously,” Roethlisberger said of his entire line from two years ago being replaced.   “I have to have confidence in who is up there in front of me now.”

A fourth round pick that has improved as much as anyone during training camp.  Rookie tackle Dan Moore will protect Roethlisberger’s blind side.

“I will have faith that Dan’s going to get it done,” Roethlisberger said.  “If the game is over and he’s given up seven sacks.  We may have to have a talk.  I don’t anticipate that happening.    I will say it over and over there will be growing pains I’m sure.  He takes pride in his work.  I’m excited about that.”

Not listed as the starter until this past week, there was little doubt, especially after JC Hassenauer’s early camp knee injury, Kendrick Green would be the number one center.

Roethlisberger says he’s passionate.  There are times already where Ben said he’s had to reel him back.

“I say, ‘Hey, listen,” Roethlisberger said. “’You’re the center. You’re too important to dwell on the last play, whether that’s getting feisty with a guy or you made a mistake, or you did something really well.  You have to have almost a quarterback mentality.  You have to move on.”

“It’s the NFL,” Green said.  “Nobody cares if you are a rookie.  Nobody cares if you’ve been playing for 30 years.  You have to go out there and do you job.  That’s how a lot of the other young guys look at it too.”

“It’s not like they are perfect or they don’t make mistakes,” Roethlisberger said.  “I think when they do make the mistakes.  You can see how much it burns at them.  It bothers them when they make a mistake.  That’s the sign of a profess