I knew that things were starting to get back to normal when I pulled into the South Lot at PPG Paints Arena and saw the sign - Parking $28.

My apologies since I didn’t pay (you know being part of the freeloading media and all) but, for future fan reference, the signs for the Fifth Ave lots across from the arena were $10 and $15.

Still, I’m thinking that the hockey-starved fans got their money’s worth since they were there for the 5-2 win over the Flyers which in a lot of ways felt like a season opener. 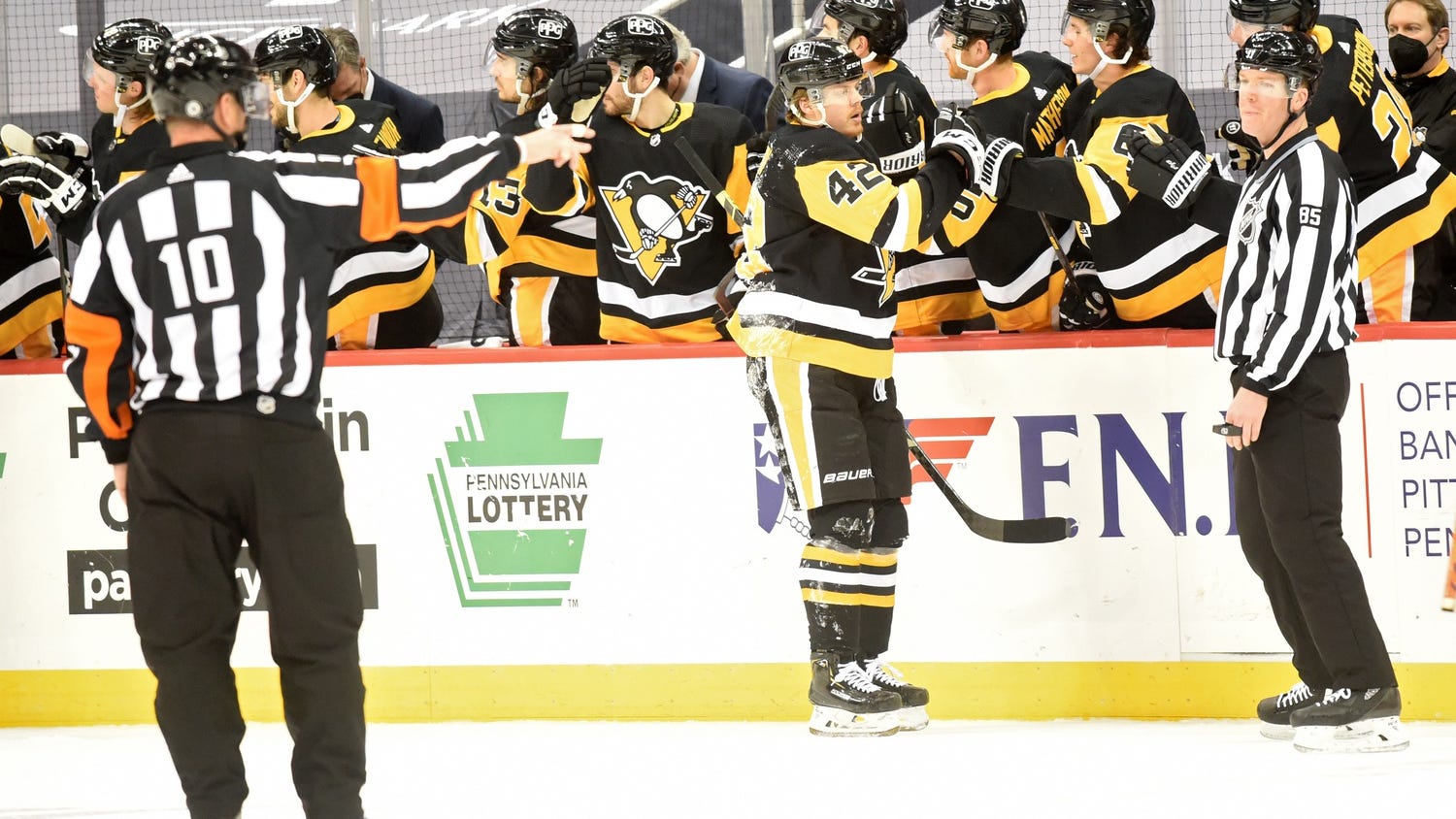 For the first time in nearly a year, albeit in much fewer numbers, there were fans lined up outside the arena. I did miss our scalper friends middle market ticket brokers since, for now, the street corner secondary market is no longer available.

I have never done business with those “had 2” or “need 2” guys (at least not in Pittsburgh) but I have missed seeing them.

Walking down Washington Place toward the media entrance I had to smile when I looked over and saw fans going up the escalator. That was more like it. Then fans lingering for just a bit outside the Peoples Gate on the corner, the lucky ones being interviewed by the Post-Gazette’s Mike DeFabo.

When I got to my spot in the press box, it was nice to see some fans, although it did look a little weird. 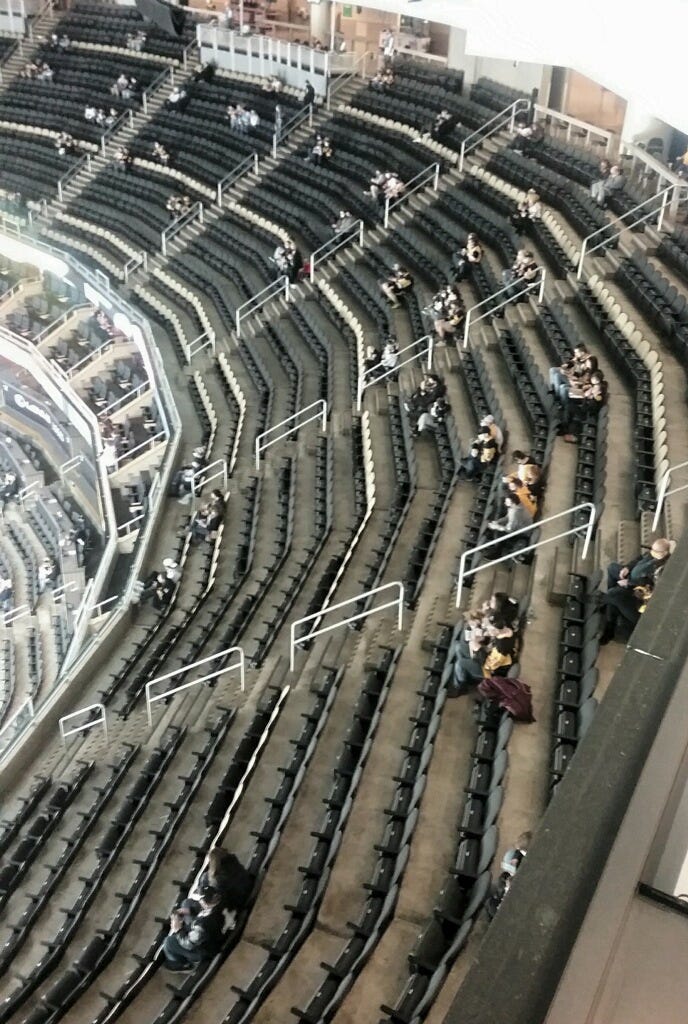 Those fortunate few were spread out fairly evenly. In the lower bowl, the advertising tarps were still draped over the front 6-10 rows depending on location. Half of the upper level sections were vacant; there were fans behind the goal the opposing goalie defends twice but none behind the goal.

Fans made their presence felt early. “It was nice,” said Bryan Rust, who scored what turned out to be the game-winning goal. “Even just going out there for warm-ups it was definitely a welcome change for sure.”

Evgeni Malkin, as always, was the last Penguin off and after all of his teammates had left the ice he took an extra few seconds looking up into the stands. The scoreboard camera picked it up, the people started cheering, and the crowd noise swelled. Satisfied, Geno kind of nodded and skated off. He went on to have a nice game.

I found out that 2800 people can make a decent amount of noise, once the players gave them reasons to cheer. While the first period wasn’t as bad as Sunday’s in New York, it was pretty close and the crowd’s enthusiasm waned, outside of cheering for Tristan Jarry who kept the game scoreless into the second period.

It got real quiet when Philly’s Joel Farabee finally beat Jarry early in the second period but the fans came alive just over a minute later when Kasperi Kapanen broke in alone to make it 1-1. Then it got downright loud when Kapanen’s power play goal gave the Pens the lead five minutes after that. “It was unbelievable,” Kapanen said. “Even though there was 28-hundred it felt like there was 20-thousand so it was a great boost from them.”

The party continued when Rust stuffed home his goal to make it 3-1 and even though the Flyers kept pressing, Jarry kept stopping pucks.
After the Penguins killed off a power play (the OK was 5-for-5) Jarry did some of his best work, making a great save then a miraculous stop to maintain the two-goal advantage which promoted the first “JAR-EEE JAR-EEE” chant of the season.

“I think that’s part of Penguins hockey,” Jarry said, after making 40 saves in all. “It’s a different feeling whenever you step on the ice and have them stand up and cheer I think that motivates us that much more.”

It was fun to have fans cheering – and booing. The officials heard it from time-to-time, especially on an icing call when Brandon Tanev was going to get there first. The Flyers heard it when they took the ice which, in a way, probably made them feel more at home. A Flyer was cheered – Oskar Lindblom, who made his first Pittsburgh appearance since battling Ewing’s sarcoma.

There were a couple of weird things. Even though there were fans and they were making some noise, they still piped in that underlying crowd din with occasional fake cheering. When it came time for Cotton Eye Joe, the scoreboard showed people dancing from a game last season which seemed strange since they were fans in the stands and they certainly had plenty of room to dance.

But Jeff Jimerson was live for the anthem from a new perch high above the rink. Fans had hockey and the players had fans. It was all good.

Maybe one of these games the 2800 will get to see Sid.