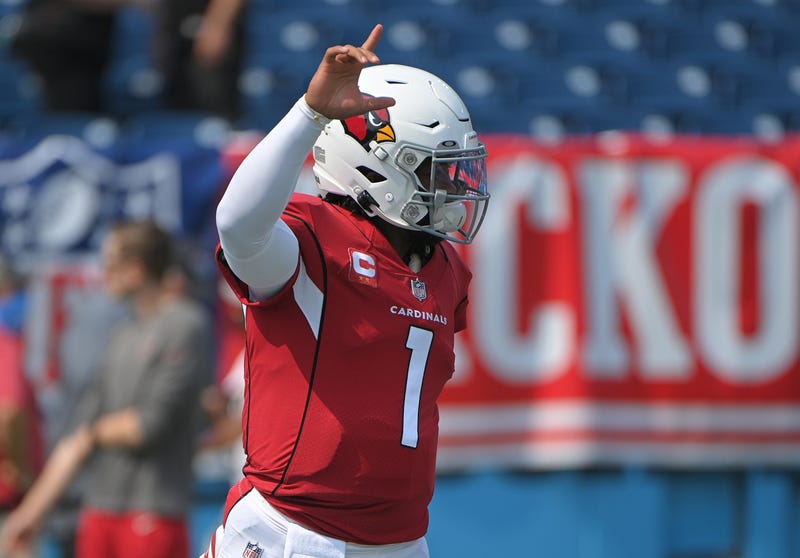 Quarterback Kyler Murray (1) holds up a his hand against the Tennessee Titans before the game at Nissan Stadium. Photo credit Steve Roberts-USA TODAY Sports
By Matt Koll

NFL Week 1 is in the books and so is the first week of the Audacy Pittsburgh Fantasy Football League. As promised, let’s update you on how some of your favorite 93.7 The Fan personalities did in fantasy football this week.

“Fan Morning Squad” off to a hot start: Colin Dunlap, Chris Mack and Producer Matt Koll are used to trying to kick things off right and they brought that same mentality to fantasy football in Week 1. They scored a league-high 152.56 points in a 28-point opening game victory. Kyler Murray’s five total touchdowns (34.56 pts) and a surprising 27.40 points from WR Deebo Samuel led the way.

Sunday Grinded: They’ll have plenty more grinding to do after this one…The “Sunday Grinders” of Josh Taylor, Shelby Cassesse and producer Greg Finley suffered the most brutal defeat of the weekend, a 45-point loss to "Kosher Nostra" (132.74-87.84). The Grinders got no help from WR’s Julio Jones and Mike Evans, who both flopped for fewer than 5 points each.

Finley is choosing to stay positive, though. “I’m really glad we didn’t take Aaron Rodgers after what he did in Week 1. Some of these guys that were great last season are off to rocky starts after Week 1 of the season. But Matthew Stafford looks to be a great pick for our team.”

Thank you for the transition, Greg. Speaking of Aaron Rodgers…

“CBDD” Disinterested in Scoring Points: Seriously, what was up with Rodgers on Sunday? Is he really throwing this season because of how unhappy he is in Green Bay? “CBDD” of Dorin Dickerson and producer Cale Berger are going to be screwed if that conspiracy theory holds true. They’re banking on a Rodgers to Robert Tonyan connection that hit for 11 touchdowns last season.

This week, though? A combined 5.12 points between the two. Disaster. Resulting in just 80.62 points as a team, the lowest in the league this week. They lost to The PM Team…Team, who overcame 3 starters scoring in single digits (other than K, D/ST) to win, thanks in large part to WR Amari Cooper going off for 32.40 points.

“A horrendous performance, frankly, but we have faith in our quarterback. We positioned our draft board to take him for a reason, he’s the reigning MVP. The Saints have had a good defense for quite some time. Aaron and the Packers will turn things around quickly,” said Cale Berger.

Bench Points Don’t Count!: Paul Zeise and Audacy Pittsburgh senior vice president Michael Spacc fell to “Bishop Sycamore” made up of Joe Starkey, producer Joe “Horse” Kapp and sales assistant Andrew Brncic by 8 points. To make matters worse, they left 3 double digit point scorers on the bench in D’Andre Swift, Jaylen Waddle and Marvin Jones Jr. All 3 could have outscored starters and made the difference. Their team name is “Zeise Is King,” but in Week 1, they were the king of missed opportunities. 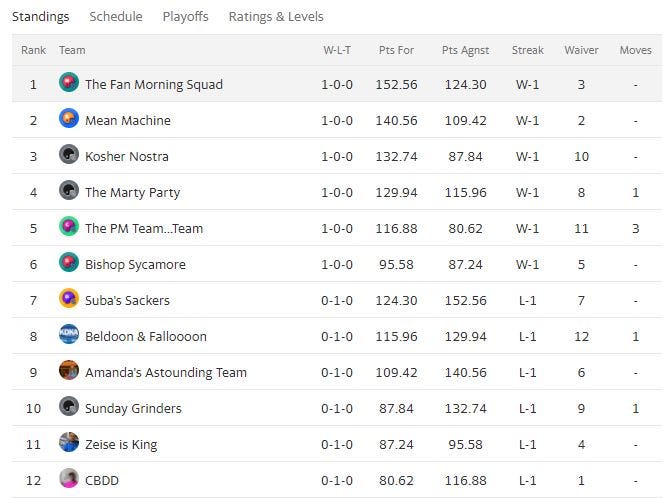