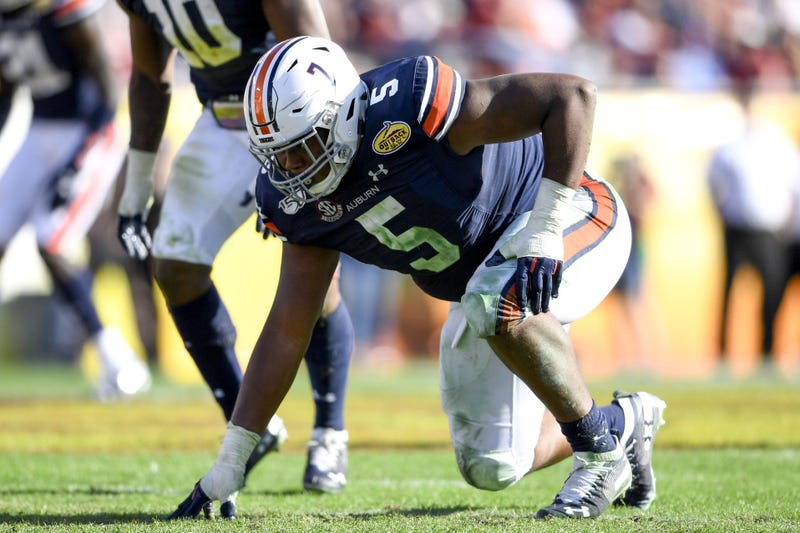 A consensus is forming among the offensive linemen at the NFL combine this week. Who was the toughest opponent they faced in college?

Those surveyed include a pair of likely first-round picks from Georgia in left tackle Andrew Thomas and guard Solomon Kindley. And here's what LSU center Lloyd Cushenberry had to say about the All-American from Auburn: "He’s the total package. Great power, speed, getting on you fast.”

The interior of the D-line has become an area of need for the Detroit, which recently parted ways with Damon Harrison and is unlikely to re-sign A'Shawn Robinson or Mike Daniels. And the Lions have a connection to Brown in defensive line coach Bo Davis, who was part of the conversation when Brown sat down with the team this week.
“I got a good relationship with Coach Davis,” Brown said Thursday, via MLive. “He recruited me out of high school, so I’ve known Coach Davis for a long time. You know, just sat down, had some good talk.”
If Davis makes a pitch for the Lions to draft Brown, he'll fall in line with Kerryon Johnson. While Johnson teased Brown when they were teammates in college -- "Just soft as sh*t," he said -- he has nothing but praise for him now. The new version of Derrick Brown, the one who was named SEC Defensive Player of the Year last season, is nothing to mess with.

"I'm telling you now, I'm not getting hit by Derrick, I'm not going to play against Derrick," Johnson said. "He has become an outstanding player."

As for the old version?

On top of his raw talent, Brown will appeal to Matt Patricia for his versatility. He can play across the D-line and boasts the power to collapse the pocket from the interior. A trio of Brown, Trey Flowers and Da'Shawn Hand could be a force up front, perhaps like the trio of Ndamukong Suh, Ziggy Ansah and Nick Fairley that once fueled Detroit's defense.

Indeed, Brown has drawn comparisons to Suh, who went second overall to the Lions in 2010.

"I respect Suh a lot as a player," Brown said. "That's a guy that plays with power, so that's not a bad comparison."

A defensive tackle might seem like a reach at No. 3, and maybe the Lions can trade back and get Brown anyway. It's certainly a scenario worth monitoring. But if Brown follows in the footsteps of the last DT they drafted in the top three, they should grab him when they have the chance.