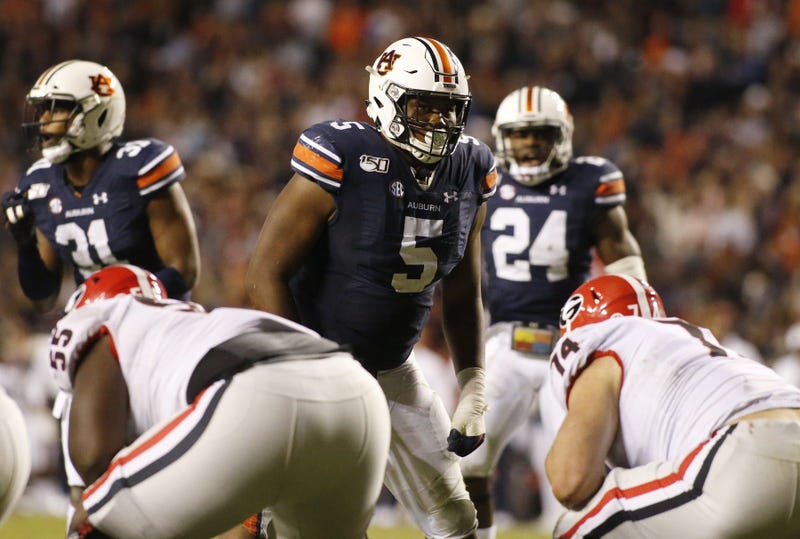 Back in their Auburn days, Kerryon Johnson had little reason to fear Derrick Brown. Johnson thought Brown was chubby and soft, and he came up with a nickname to prove his point.

“Me and Derrick used to hate each other, believe it or not,” Johnson said on Thursday. "I was pretty rude to Derrick when he first got there. Called him ‘Brownie’ because he was all baby fat and just soft as sh*t."

These days, Johnson wants nothing to do with Brown -- unless they wind up on the same team again. The defensive tackle morphed into a beast in college and is projected to be a top 10 pick in the draft.

"I'm telling you now, I'm not getting hit by Derrick, I'm not going to play against Derrick," Johnson said. "He has become an outstanding player."

Brown, 6'5, 318 lbs., was a wrecking ball in the middle of Auburn's D-line. He racked up 31.5 tackles for loss and 12 sacks over the last three seasons. Many thought he should have turned pro last year, but Brown opted to return as a senior. Then he was named a first-team All-American and the SEC Defensive Player of the Year.

With the Lions holding a top five pick and desperate for help on defense, there's a chance Brown and Johnson could be reunited in Detroit.

“Hey, I am all for that,” said Johnson, who won SEC Offensive Player of the Year in 2017. “He’s a good, fantastic player. I’m all for that. As many Auburn guys on the team that we can have, I'm all for it."

As for the hazing?

"He was actually fat," Johnson laughed. "We got past that, though."

The D-line was supposed to be a strength this year for the Lions. Injuries and underperformance left it a weakness. Brown could give that unit an instant jolt, which will appeal to Bob Quinn and Matt Patricia with their jobs on the line. It sounds like Brown has the character they're looking for, too.

"He’s always been a good guy, despite (my) rudeness to him, and he’s even gotten better," Johnson said. "I mean, you look at him, you talk to him, you read about him, he’s been upstanding. When he came back, everybody questioned like, 'What are you doing? Why are you not (going pro)?' He came back to finish something that he started, and he finished it.

"He got better, he kept that team together, he won some tough games for those guys. He played excellent. Everything he was supposed to do he did, so I can’t be anymore happy for him. I will never tell him that, because that's just not what I do, but I really couldn't."