The day ended how it began, with a tribute to the grieving community of Oxford. Wearing an Oxford High School Wildcats hat, Dan Campbell dedicated the game ball of the Lions' first win of the season to the Michigan community torn apart by a school shooting this week that claimed the lives of four teenagers and left six more students and a teacher wounded.

"First thing I’ll start with, this game ball goes to the whole Oxford community, all those who were affected," Campbell said when he took the podium following Detroit's last-second victory over the Vikings at Ford Field. "Man, I just want us to not forget these names: Madisyn Baldwin, Hana St. Juliana, Justin Shilling, Tate Myre, Phoebe Arthur, John Asciutto, Riley Frantz, Elijah Mueller, Kylie Ossege, Aiden Watson and Molly Darnell, who’s a teacher. Those names will never be forgotten. They’re in our hearts and prayers, not to mention all those who were affected by all of this, the classmates, the brothers and sisters, the cousins, the teachers, coaches, everybody."

Those who died were Baldwin, 17; Schilling, 17; Myre, 16; and St. Juliana, 14. Myre was a star football player to whom the Michigan Wolverines dedicated their Big Ten championship on Saturday; he lost his life in an effort to stop the shooter. 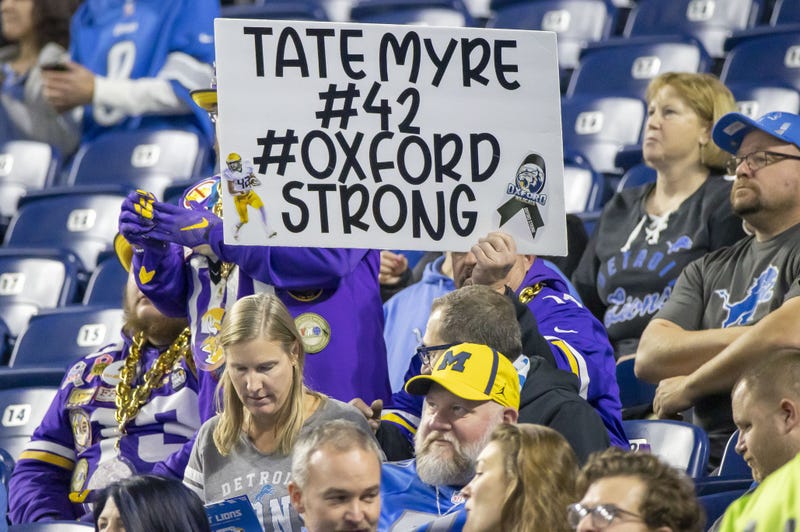 Lions players and coaches, plus some members of the Vikings, took the field for warmups wearing Oxford Wildcats T-shirts in solidarity with the high school about 40 miles north of Detroit, prior to a moment of silence for the four victims before kickoff. During the game, coaches wore Oxford hats on the sidelines and players wore helmet decals of the high school's logo.

Campbell said he discussed "the depth" of the tragedy with his team Saturday morning as they decided how they wanted to honor the community.

"I just wanted them to know exactly what we were going to represent today, the shirts, the hats, the decals, the people that are affected," Campbell said. "And some of our players know of someone that was affected. To me, my thought was, 'Hey man, if we can just for three hours ease their suffering a little bit, that’s worth it. That’s worth it.'" 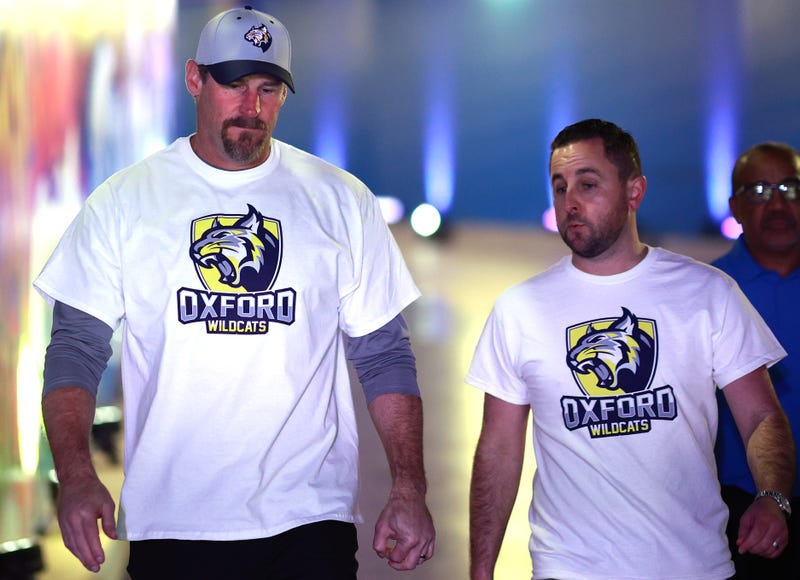 Quarterback Jared Goff, who also wore an Oxford hat to his postgame press after delivering the buzzer-beating touchdown to Amon-Ra St. Brown, fought back tears as he discussed the feeling of lifting a community, even for a few hours.

"Trying not to get emotional," he said, pausing multiple times to steady his voice. "But sometimes, special things happen in special circumstances. You saw yesterday what Michigan did against Iowa, and then us today getting our first win after 12, 13 weeks. You never hope for a tragedy like this, but you hope to be a light for those people and a positive thing that they could have fun watching today. I hope they were all watching today and were able to enjoy that win and we could take their minds off it for whatever it may be, three hours. Anytime that we can do that, it’s a lot bigger than our sport, it’s a lot bigger than us.

"I thought today was one of those special circumstances where we were able to rise to the occasion and make something special happen."