Despite scoring as many points as Patrick Mahomes and the Chiefs through the first two weeks of the season, there's a feeling that Jared Goff and the Lions offense can do more.

"I certainly feel that way," Goff said Tuesday on 97.1 The Ticket. "I think I said it two weeks in a row. We could’ve blown that game wide open this past week, and then two weeks ago I felt like we could’ve scored 50 with some of the stuff we left on the field."

The Lions are the only team that's scored at least 35 points in both of their first two games. (Only Josh Allen and the Bills have scored more in total.) They scored 36 in a convincing win over Washington last week, and could have -- probably should have -- scored that many in the first half alone.

Goff just missed touchdown passes to D'Andre Swift and DJ Chark on two drives that ended in field goals, and just missed Chark on another potential touchdown on a deep ball just before halftime. The Lions also turned it over on downs after three chances from Washington's three-yard line early in the game. All told, they left as many points on the field as they scored in the first two quarters: 22.

"We just missed on that double (move) to DJ in the end zone, I just missed him on the ball right before half," said Goff. "We’re so close on a couple of those balls down the field and so close on some of these runs that are going to pop. It’ll really open our whole offense back up to the standard that we have.

"I know we’ve been playing well and we’ve been doing some good things, but with that being said, it’s a good feeling of pissed-off-ness, like, ‘Man, we still have some stuff left out there.’ I think Ben’s doing a great job setting that standard for us and we’ve been following it."

Ben would be first-year offensive coordinator Ben Johnson, who's shown creativity and timing in his first two games calling plays. Commanders safety Darrick Forrest said Sunday that Detroit had the upper hand on Washington in "scheme," particularly in the half.

“I felt like they knew exactly what we were in," he said. "It was great offensive play-calling.”

That was especially true midway through the third quarter after Washington had made it a one-score game. On the first play of the next drive, Johnson called an end-around to Amon-Ra St. Brown that went for 58 yards and swung the momentum back in Detroit's favor. It was a play that the Lions had been setting up all game by sending St. Brown in motion until the Commanders were weary instead of wary. 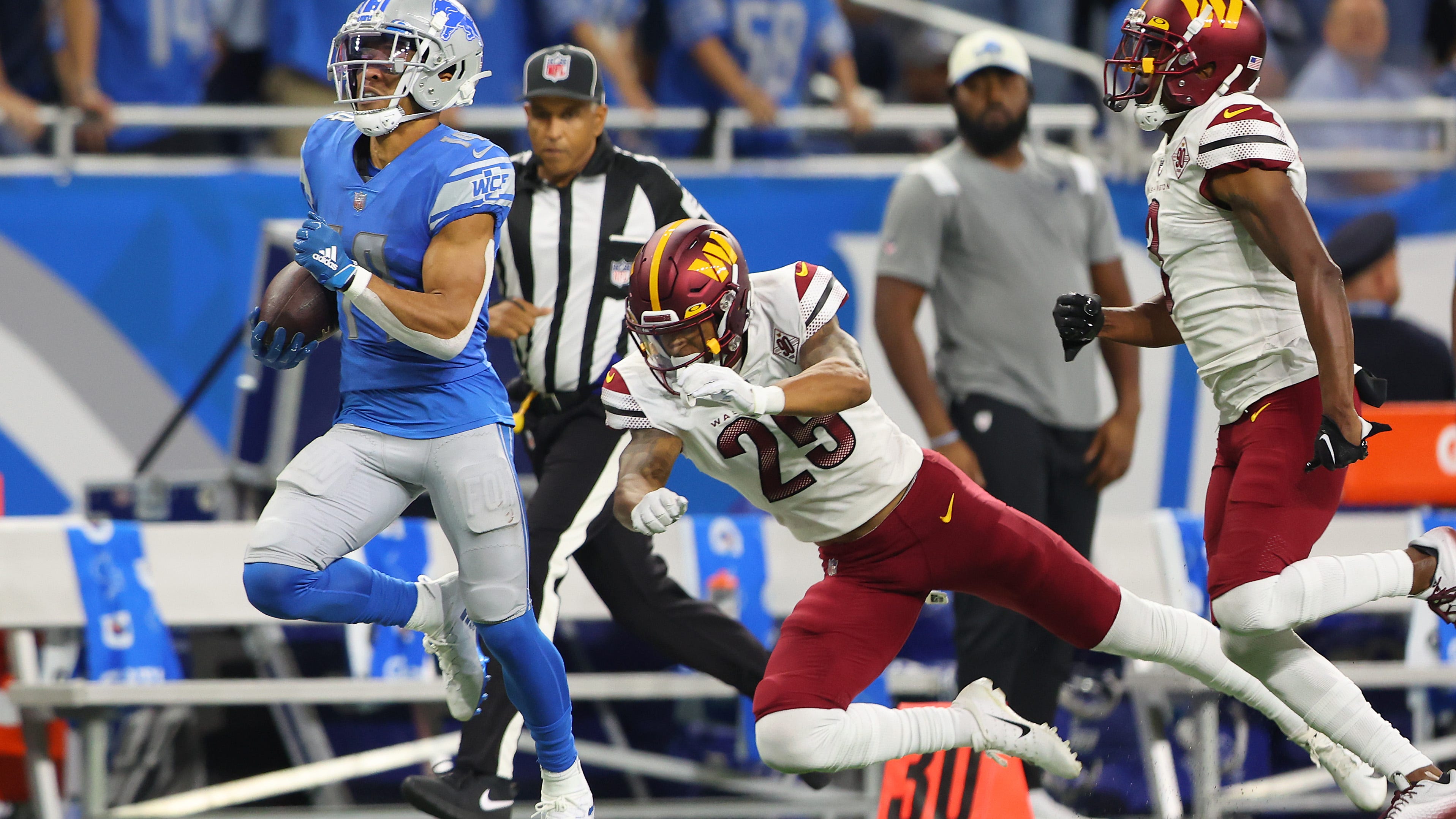 D'Andre Swift scored on a dazzling catch-and-run three plays later to put the game firmly in the Lions' grasp. It relieved the tension at Ford Field, where the crowd had grown restless amid fears of another collapse, another letdown, another Same Old Lions loss.

"You guys gotta stop talking like that," said Goff. "You gotta stop putting that in the air."

Goff got a crash-course in crushing losses last season. He learned the hard way about heartbreak, and how the Lions can take it to the extreme. He vowed after their impossible last-second loss to the Ravens in Week 3 that "the gut punches will stop." Last week -- for one week, anyway -- they did.

"They threw us a couple good punches and we threw one right back, and that’s what good teams do. And we’re becoming that," said Goff. "Are we there yet? No, absolutely not. We’re 1-1 through two weeks. But that was a good step in the right direction of facing a little bit of adversity in the middle of the game, our defense giving up two touchdowns and our offense stumbling for a few drives and then, ‘OK, guys, let’s get our feet back underneath us and go make some plays.’ And we did that. And then our defense stood tall again and we bounced back in all areas.

"I think that whole narrative that you’re talking about, we’re not talking about it, so I don’t know if you guys should either. I know I’m busting your balls a little bit, but it’s not how we feel about anything around here."