The first question is this: will Matthew Stafford be traded this offseason? Which means the next question *might* be this: where will he land?

It's no sure thing the Lions will move Stafford at all. In fact, the early signs point toward him returning. Vegas agrees. Stafford is favored to start next season with the Lions (-215), according to Bovada.

"He’s our quarterback," president/CEO Rod Wood said Tuesday. "He’s a very important player, very important position. But again, when we have people in the building to weigh in on those decisions, that’s when we’ll be able to talk more about it. Certainly everybody that we've talked to admires Matthew from afar, just as much as we admire him inside the building.”

Let's say those people -- the next general manager and the next head coach -- decide it's time for the Lions to move on at quarterback. Where might Stafford wind up? Here are his top five potential landing spots, according to Bovada.

Indianapolis has been in flux at the QB position since Andrew Luck's surprise retirement. Philip Rivers came in on a one-year deal this season and played well enough to get the Colts to the playoffs. But Rivers, 39, is probably in his final season. And Indianapolis, a team built to win now, will probably swing big at quarterback this offseason. In terms of trade ammo, the Colts have a pick in every round of this year's draft.

The Dwayne Haskins era lasted less than two seasons, and now Washington is back on the hunt for a quarterback. Like the Colts, the Football Team is otherwise poised to win now, especially on defense. It also boasts one of the best young receivers in the NFL in Terry McLaurin. Stafford's arm and McLaurin's speed? Heads up. Washington has an extra third-round pick and two extra seventh-rounders this year.

Yes, the Bears could go QB shopping this offseason, barring some kind of Mitch Trubisky miracle in the playoffs. But if it's unlikely the Lions trade Stafford to begin with, it's even less likely they trade him to a division rival. (As in, nope.) This one feels like a longshot, more so than the next two teams on this list.

This would be contingent on the 49ers moving on from Jimmy Garoppolo, which certainly doesn't sound like the plan based on recent comments from head coach Kyle Shanahan and GM John Lynch. That said, Garoppolo could be traded at a minimal financial cost and the 49ers are well-equipped to do some damage with a high-level quarterback. One to keep an eye on.

If you're a betting man, this is probably the best value. Bill Belichick and the Patriots need a quarterback, and Matthew Stafford needs a head coach and an organization that know how to win. It would be a cruel turn of events for the Lions, sending their franchise QB to the place that produced a GM and a head coach who failed him. (And then inevitably watching Stafford take his career to new heights.) But if the offer is right, the Lions can't say no. 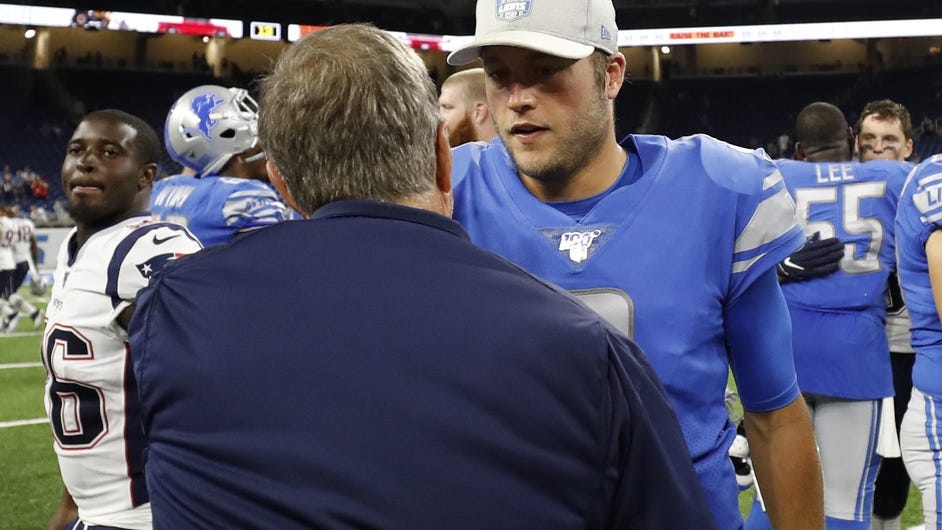