Basketball star Devin Booker is showing his appreciation for a Phoenix Suns fan who was seen in a video that went viral on social media beating up a Denver Nuggets fan in the stands at a recent playoff game.

Booker, who took to social media to see if he could track down the fan, has reportedly reached out to him with an offer of an autographed jersey and free tickets to a game at the upcoming Western Conference Finals, ESPN and others reported.

The fan, in a series of media interviews, has identified himself as Nick McKellar, a lifelong Suns supporter and former Arizonan currently living in Denver, where the incident took place on Friday at Ball Arena during Game 3. 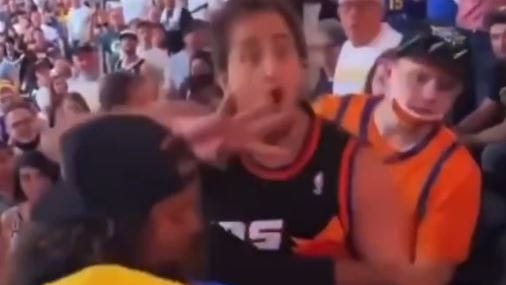 Parts of the ugly scene were captured on cellphone video by nearby fans and later posted to social media. McKellar says light-hearted trash talk turned ugly when the group of Nuggets fans seated behind him started shoving, knocked off his cap, and dumped a beer on him.

In the video, one of the Nuggets fans lunges at McKellar with a pair of wild haymakers, only to miss. McKellar then holds his opponent down by the back of the shirt collar, hockey-style, and unleashes a barrage of vicious uppercuts, leaving the Nuggets fan dazed on his feet.

McKellar, wearing a vintage No. 13 Steve Nash jersey, caps the brutal encounter by casually declaring the Suns would sweep the Nuggets -- "Suns in four" -- which in fact they did.

McKellar says he was escorted out of the arena after the incident, adding that he was defending himself, and nearby fans were cheering him on against the apparently disruptive group. Local media reports said there was no police involvement.