When the New York Jets and San Francisco 49ers selected quarterbacks with the No. 2 and No. 3 picks in the 2021 NFL Draft, both franchises thought they were solving the most important position in sports for at least a decade.

But as the rookie seasons of Zach Wilson and Trey Lance wind down, there's legitimate questions about whether either were worth the investments that their respective teams made in them.

Wilson -- who some felt had the highest upside of any quarterback in last year's class after a breakout junior season at BYU -- has thrown six touchdowns to 11 interceptions in parts of eight games. And as Audacy Sports NFL Insider Ross Tucker put it Sunday, the 22-year-old "throws some of the worst interceptions that you've ever seen."

No one is suggesting that Wilson has walked into a situation with a team that's ready to win -- the stability that many thought Robert Saleh would bring to the Jets hasn't yet come. The Jets are 3-9 with a league-worst -150 point differential.

And yet, it may be Saleh's former employer -- the 49ers -- who are in an even worse position.

If it turns out that the Jets didn't hit on a top-five pick, that's unfortunate, but at least one team makes a regrettable top-five selection ever year. If the 49ers whiffed on the No. 3 overall pick, not only did they burn that selection, but also two future first-round picks and a third rounder which were used to trade up to that pick. As we put it at the time, the selection of Lance "could put you on a parade float or get your regime dismissed within the next five years."

Lance's athleticism is clearly elite, but outside of 47 pass attempts in relief of an injured Jimmy Garoppolo in Week 4 and Week 5 losses, the No. 3 overall pick has hardly seen the field. In his lone start in Week 5, moving the ball through the air seemed like a struggle for Lance. Granted, the 49ers lost that game by just a touchdown to the NFL-best Arizona Cardinals. But a year after playing just one showcase game at North Dakota State because of the COVID-19 pandemic, 2021 has essentially turned into a redshirt rookie year for Lance.

It's fair to wonder if Kyle Shannahan and company will just hand the keys over the Lance next year. He has to get consistent snaps and a chance to develop at some point, but the 49ers are a team built to win right now, and Garoppolo is pretty clearly a better option at this juncture. Garoppolo has a $27 million cap hit in 2022, the final year of his deal. It's fair to wonder if the 49ers will bring him back at that price, unsure of whether Lance will be ready to start for a team that fancies itself a Super Bowl contender.

Keep in mind, we aren't saying that Wilson and/or Lance won't end up being star quarterbacks. However, neither is trending in that direction right now. And as we rank the top 10 quarterbacks age 24 and under in the NFL, both find themselves on the outside looking in: 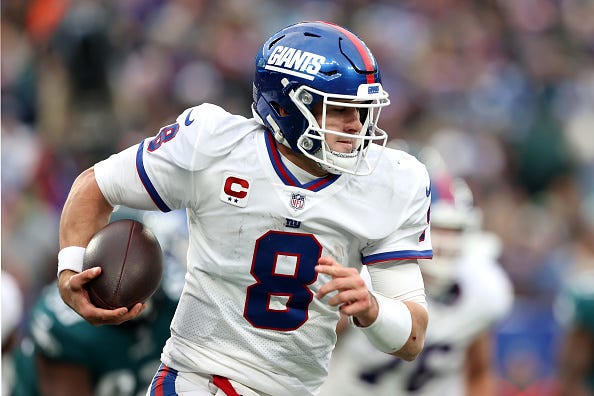 Daniel Jones is the starting quarterback for the Giants. Photo credit (Elsa/Getty Images)

There's a decent chance that Jones is playing out his final few games as the starter for the Giants, which probably checks out given that his inability to protect the football might be a fatal flaw. Certainly, though, Jones has been burned by a lack of coaching stability, disastrous offensive line play and consistent injuries from Saquon Barkley. He's probably more geared to be a high-end backup, but it would hardly be surprising if the former No. 6 re-emerges in a more stable situation and performs at a higher level. 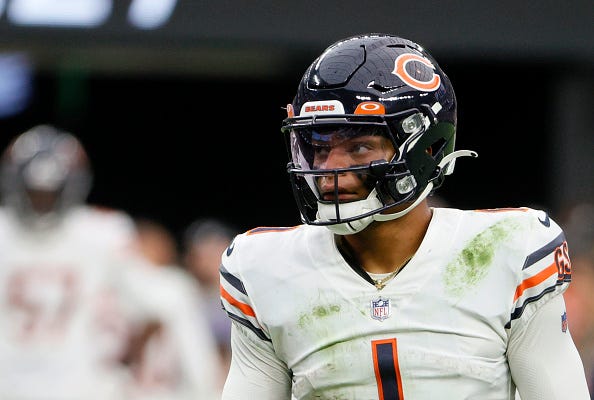 Justin Fields is the quarterback for the Bears. Photo credit (Ethan Miller/Getty Images)

Fields has missed the last two games because of cracked ribs, and has four more interceptions (eight) than touchdown passes (four) in his rookie season. However, he has flashed his unteachable athleticism on a few cases, and we remain intrigued about what he could do with a different coaching staff, which is likely to come in 2022. 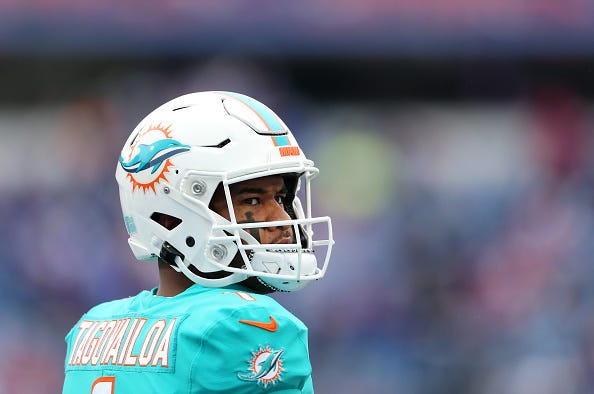 Pro Football Talk's Mike Florio opined last week that the seemingly credible Deshaun Watson to Miami buzz likely negatively affected Tagovailoa's play, and that the former Alabama star has benefitted from the trade deadline passing. That's probably true, as the Dolphins have won four straight games and Tagovailoa has tossed five touchdowns to just one interception. Still, it is fair to question whether Tagovailoa has any truly elite physical traits that will stop the Dolphins from revisiting the Watson sweepstakes in the offseason. 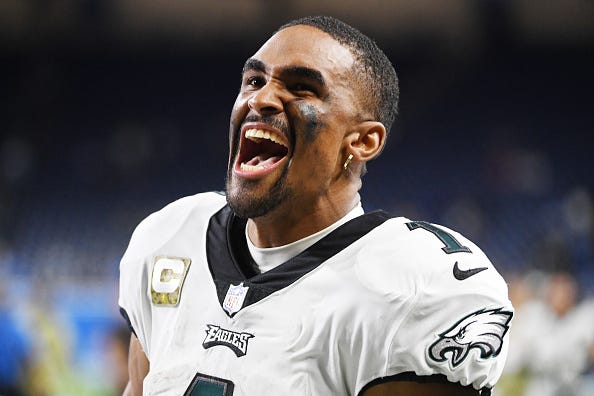 While it's fair to wonder whether he'll ever be able to go blow-for-blow with some of the sport's elite passers, Hurts has done a pretty good job of taking care of the ball, outside of a three-interception performance in a Week 12 loss to the New York Giants. He's not Lamar Jackson or Justin Fields on the ground, but he can still be a game-changer in that aspect, as evidenced by his 695 rushing yards and eight touchdown scampers this season. It will be interesting to see how the Eagles proceed this offseason, given that they are on track to have three first-round picks in the 2022 NFL Draft, and there's a chance that multiple established quarterbacks become available via trade. 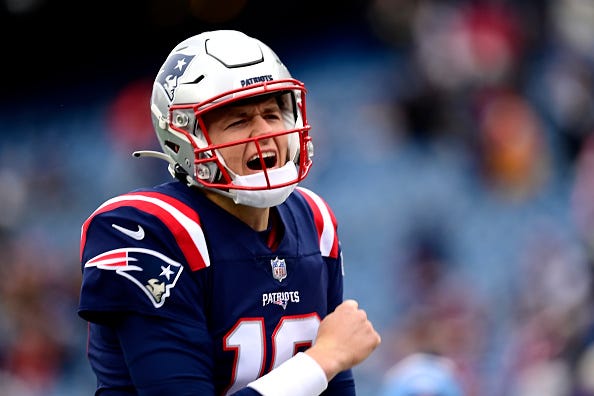 Those that believed Jones was the most pro-ready quarterback in the 2021 NFL Draft class have been proven right. Jones has 16 touchdown passes to eight interceptions in 2021, and in a year without many clear Super Bowl favorites, the 8-4 Patriots seemingly could make a deep run in the postseason. He wasn't the most physically-gifted prospect in last year's draft class, but it's fair to assume that if the 2021 NFL Draft could be redone, Jones wouldn't make it to the Patriots at No. 15. 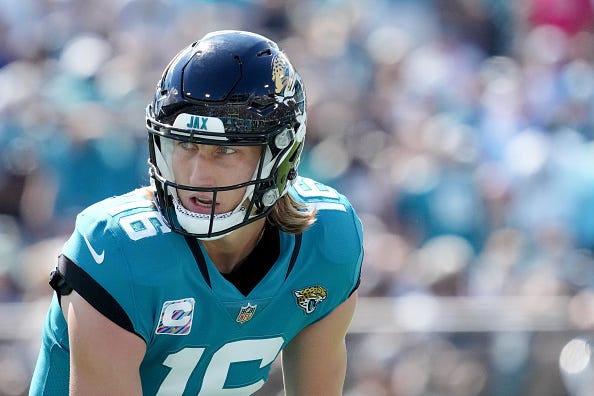 Lawrence hasn't had the best season among rookie quarterbacks, but he's kept his poise through all the Urban Meyer-induced drama in Jacksonville. Our guess is that someone other than Meyer will be the team's head coach in 2022, and if the team gets Travis Etienne back and is able to continue to add talent around Lawrence, he's going to have a very good career. 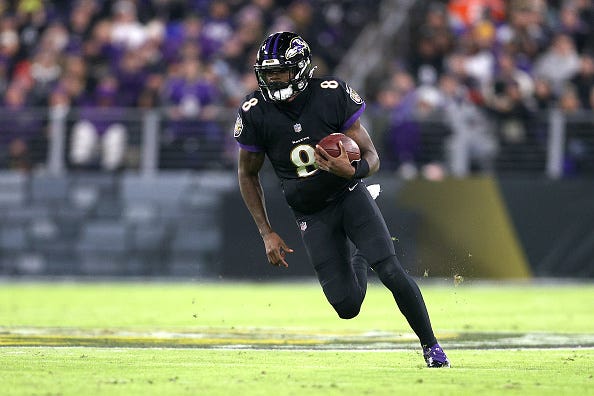 Rather amazingly, Jackson is in his fourth NFL season and won't celebrate his 25th birthday until January. Jackson was the 2019 NFL MVP, and is certainly deserving of a massive second contract in Baltimore. But while Jackson has a chance to rush for over 1,000 yards for the third consecutive season, his passing has felt a bit manic in 2021. Two years after tossing 36 touchdowns to just six interceptions in his MVP season, Jackson has thrown 16 touchdowns to 13 interceptions in 2021. 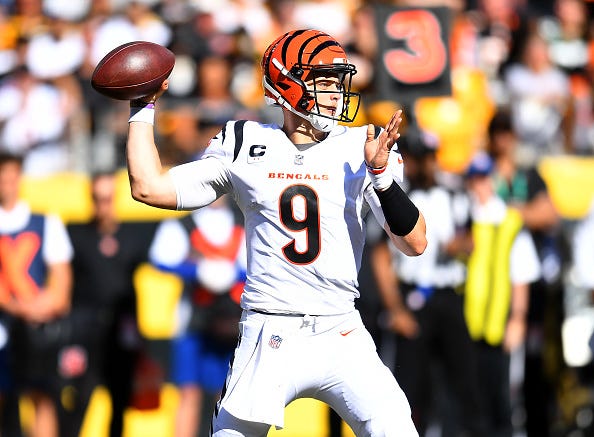 Burrow does lead the league with 14 interceptions, but he's also tossed 23 touchdown passes to along with that. Two seasons after going 2-14, Burrow has given the Bengals a legitimate chance to reach the postseason. As much as anyone on this list, Burrow has a culture changing quality that very few quarterbacks in NFL history possess. He landed with an organization that badly needed that type of player. 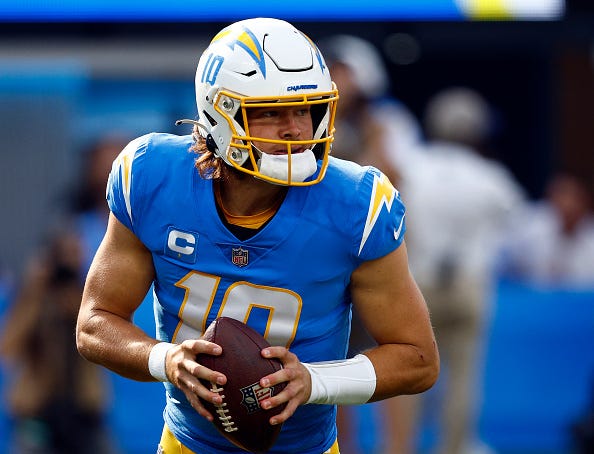 The reigning Offensive Rookie of the Year, Herbert has tossed 27 touchdowns to 11 interceptions for the Chargers in his second season. He has a Matthew Stafford-like ability to make every throw you ask of him, but with much more mobility. There's some teams that would take him over Burrow if we re-did the 2020 NFL Draft. Every team would take him over Tagovailoa, and possibly Chase Young. 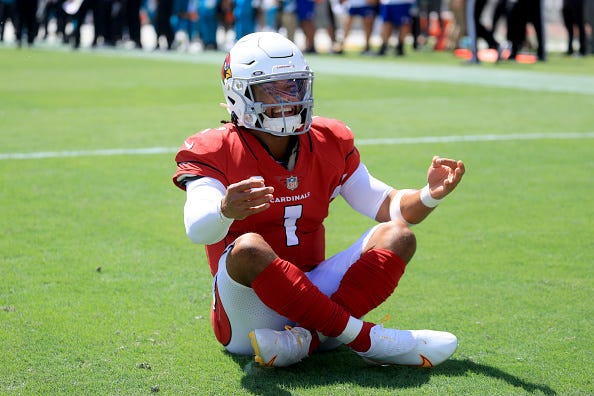 Oh yeah, he's still only 24. Murray is one of the slipperiest players that the NFL has ever seen, certainly when you just limit the discussion to quarterbacks. He also has a Russell Wilson-type ability to avoid contact when he takes off. With 19 passing touchdowns and five more on the ground, Murray has solidified himself as one of the top five quarterbacks in the NFL, and a legitimate MVP candidate. 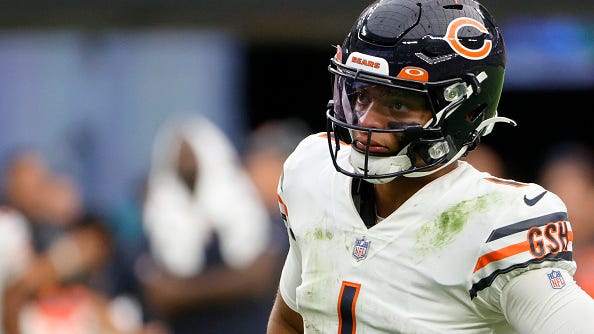 Mike Florio believes Jaguars would take Justin Fields No. 1 overall if they had a mulligan