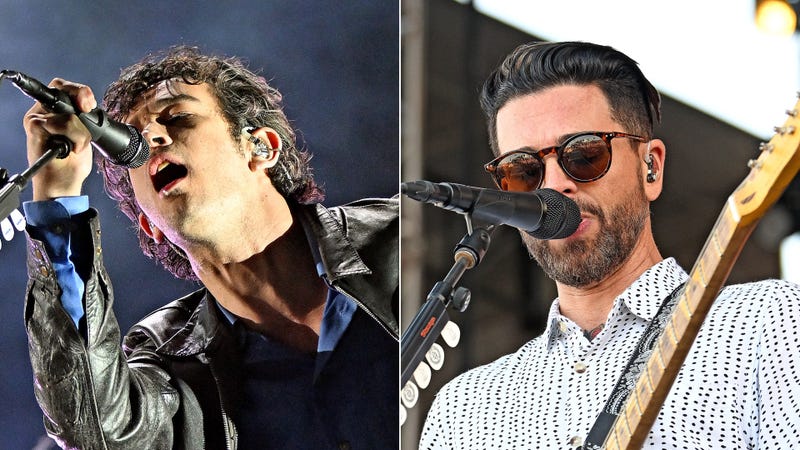 At this past weekend's Audacy Beach Festival, both The 1975 and Dashboard Confessional took the stage for thrilling performances, and both bands joined hosts Ashley O and Kevan Kenney in the Hard Rock Artist Lounge to discuss not only their separate sets but also The 1975 frontman Matty Healy's appearance in Dashboard during their set.

While Matty Healy's appearance on stage at the end of Dashboard Confessional's set on Sunday (12/4) for "Hands Down" may have been a surprise to the rest of his bandmates in The 1975, who were each in the crowd or at the spa during their set, Matty revealed he knew exactly what he was doing.

"I'm friends with Chris [Carrabba], I've known him for a while. We've been a band since 2002-2003, so we were around in that whole scene, people just didn't care about us, so we survived it." For his part, the Dashboard frontman has in the past performed with and called The 1975 "the greatest band in the world," something the band is extremely thankful for. "It's very sweet for him to say something like that, it was lovely," adds Matty. "I just wanted to be in Dashboard for a minute."

"Emo multiverse is glitching," Healy wrote on Instagram beside a clip of the surprise moment.

"We're old friends and, of course, we're big fans," Dashboard Confessional's Chris Carrabba adds. In 2019, Matty took the stage with the band in London to perform The 1975’s “Sex,” which Dashboard covered on their four-song Covered and Taped EP in 2017.

Helping fans understand how such a last-minute collaboration comes about, Chris says Matty called him up asking if he could sing on the Dashboard hit, "Screaming Infidelities," but was worried he would arrive too late. After finding out the last song in their set, Matty said, "great, I'll play guitar on 'Hands Down.'"

Listen to both backstage clips above and be sure to follow along for more updates from the sun and sand of Audacy Beach Festival 2022.