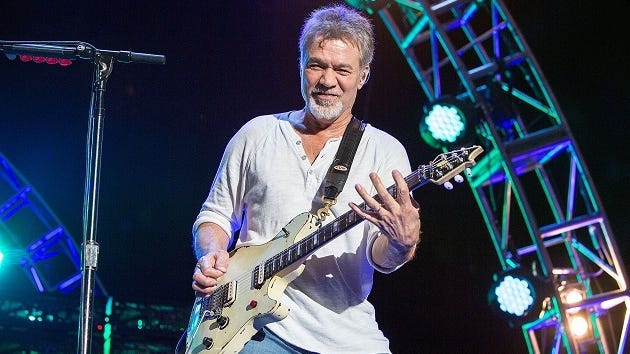 A brief tribute to the late Eddie Van Halen reportedly will be featured on The Rock & Roll Hall of Fame 2020 Inductions special, which premieres on HBO and HBO Max at 8PM ET/PT on Saturday, November 7.

According to Cleveland.com, the homage will feature multiple well-known rock guitarist saluting Van Halen, who died October 6 at age 65 after a long battle with cancer. Eddie was inducted into the Rock Hall as a member of Van Halen in 2007.

The tribute will be part of the Rock Hall special's "in memoriam" segment, which will commemorate various famous rock 'n' roll figures who died over the last year and a half, including Little Richard, Rush drummer Neil Peart, Cars frontman Ric Ocasek and Cream drummer Ginger Baker.

As previously reported, the 2020 Rock & Roll Hall of Fame Induction Ceremony originally had been scheduled to take place May 2 at Cleveland's Public Hall, but was postponed until November due to the coronavirus pandemic. Eventually, it was decided that a pre-taped special would take the place of a live event this year.