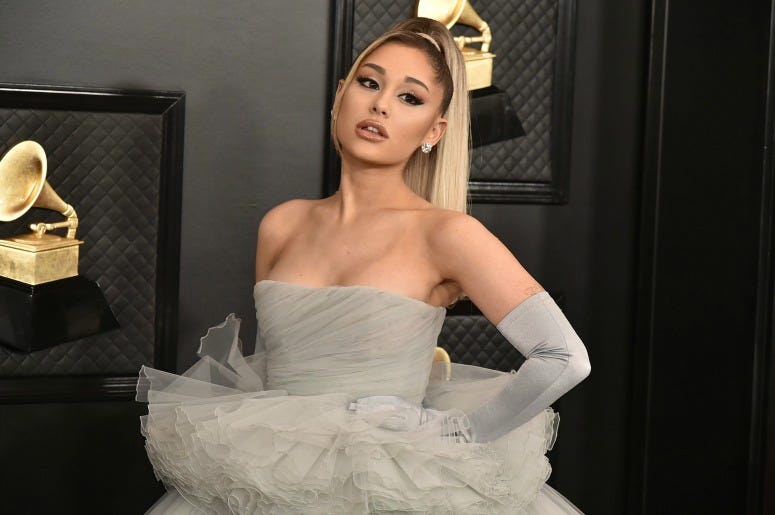 Ariana Grande is here to help chase away those 2020 blues with her brand new album, Positions, which dropped at the stroke of midnight on Friday. The album, as fans have noted, is her most intimate and sensual yet as she openly explores her desires through double entendres and vulnerable lyrics.

The "Rain on Me" singer first started teasing her upcoming studio effort on October 19, leaving cryptic hints in video messages where she spelled out the album's name on a keyboard.

The GRAMMY Award-winning singer followed up by dropping the album's title track last Friday and, the next day, leaked the complete tracklist -- revealing collaborations with Doja Cat, The Weeknd and Ty Dolla $ign.

For "motive" with Doja Cat, Grande evokes the signature sounds of 90s pop, from the mellow drum beat to the oscillating whistles, as the two sing about engaging with a potential lover before wondering if they have a hidden agenda.

Grande and the Weeknd team up for "off the table," an R&B single chock full of sensual lyrics gently recited against a mid tempo beat. Both artists show off their impressive vocal range, from Grande's whistle register to The Weekend's ability to effortlessly cascade through a series of notes, as they sing about falling in love.

The 27-year-old singer pairs with Ty for "safety net," a pensive pillow talk single about a fear of committing to a relationship that seems almost too good to be true.

Grande previously expressed that Positions is "my favorite [album] for many reasons" and that she doesn't have "a top three [songs] or anything."

Positions is Grande's sixth studio album, the follow up to her February 2019 effort thank u, next.  It is available now purchase online and in stores.

i don’t have a top three or anything ! everything goes hand in hand. this project is my favorite for many reasons and i really can’t wait for it to be yours. thank u for your love and excitement, it means the world to me. 🤍