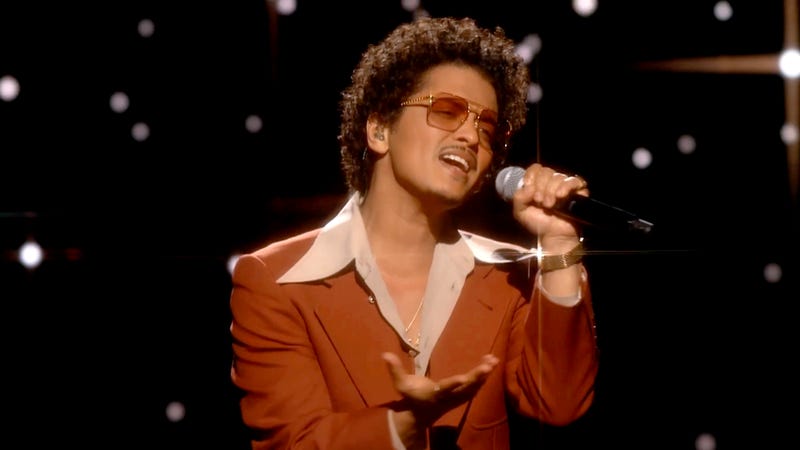 Bruno Mars is an owner of the ultra-premium rum brand SelvaRey, and he stars in a new commercial for its new coconut rum, and the liquor's "Tropical Luxury, Wherever You Are" campaign. But while the ad mentions the joys of rum punch, Mai Tais, and Pina Coladas, Bruno says if he could raise a glass with any other musician in history, it wouldn't be one of those drinks he'd be downing.

Asked by The Daily Beast, "If you could have a drink with one musician dead or alive, who would it be and what would you drink?" Bruno replied, "I'd drink a Mojito with Luther Vandross!" The chart-topping R&B superstar sadly passed away in 2005.

Asked to name the "all-time best dive bar jukebox song," Bruno surprisingly didn't choose a raucous rock tune or a country song about drinking. His pick? "The Sound of Silence" by Simon and Garfunkel.

In the new commercial for SelvaRey, which Bruno also directed, he stars with his Silk Sonic bandmate Anderson. Paak, as well as two of his musical collaborators, songwriter James Fauntleroy and producer D'Mile. The ad also features a soulful new jingle, but it's Fauntleroy who sings it, not Bruno. Never Too Much: Luther Vandross celebrated across the web for his 70th birthday

By the way, "SelvaRey" loosely translates to "King of the Jungle." Initially announced as the brand's "creative visionary," Bruno now tells Adweek, "My real positions with SelvaRey are 'mogul,' 'lord of rum' and 'royal highness,' but I'm a down-to-earth guy, so I just go by 'your majesty.'"

WATCH MORE: 5 Celebs Who Surprisingly Have a Rap Sheet