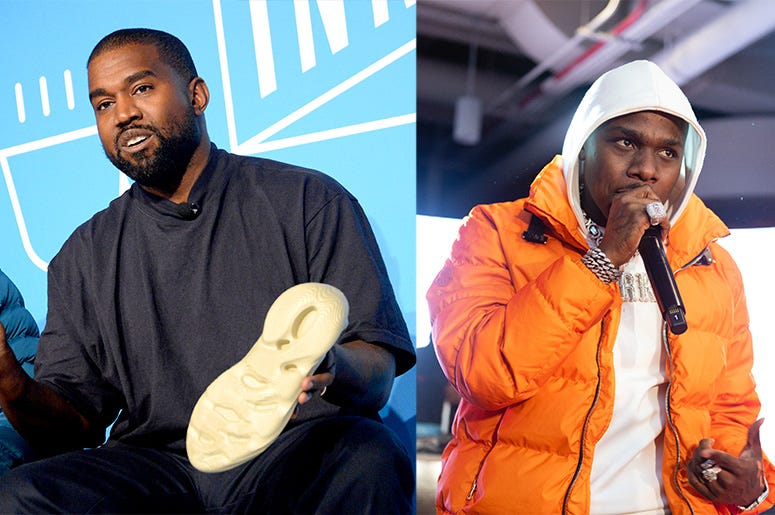 Kanye West is working on new music with one of the hottest rappers in the country, DaBaby.

On Sunday, Ye and DaBaby shared a text convo, where DaBaby mentioned he had "been" and was "still inspired" by the multi-Grammy-winning hitmaker since his 2007 album, Graduation.

Hours later, Ye returned to share a 15-second snippet of DaBaby rapping over a trap-flute beat.

"DaBaby turned this verse around so quick," he tweeted, sharing an animated painting of a skull head with long white hair. "It's so inspirational to see how fast we can move as a people. I had to give y'all at least a snippet."

DABABY TURNED THIS VERSE AROUND SO QUICK ITS INSPIRATIONAL TO SEE HOW FAST WE CAN MOVE AS A PEOPLE. I HAD TO GIVE YALL AT LEAST A SNIPPET. pic.twitter.com/Ap1SNAmFNK

"Let me get 'em Ye/ They gone hate on me [the] young [dude] anyway," DaBaby raps on the track. "They only call me when they have a bill to pay / Ain't nobody ask me how I feel today."

The track's beat sounds like Kanye's latest theme song "Nah Nah Nah," where he discusses his presidential ambitions after announcing his bid for presidency in July.

THE WHOLE TEAM IS SO ENERGIZED THAT I HAD TO RELEASE THEME MUSIC NAH NAH NAH pic.twitter.com/p3NhTV11cN

DaBaby said he's in full support of Kanye as the next U.S President, despite Kanye's struggle to get his name on the ballot in several major states.

"Ima let y’all finish.... But you got me f***** up you think I ain’t voting for Ye," DaBaby tweeted referencing Kanye's infamous faux pas where he interrupted Taylor Swift's acceptance speech at the 2009 VMA's.

But you got me fucked up you think I ain’t voting for Ye. 🇺🇸