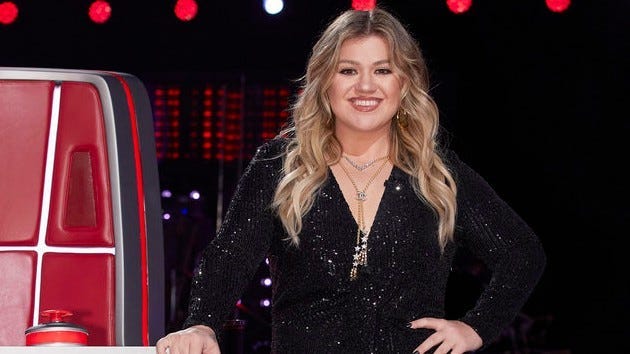 The new season of The Voice kicks off tonight, but like every TV show these days, it's being filmed under COVID-19 restrictions. While the show structure is the same, coach Kelly Clarkson says there's been some big changes on set.

"We're eight feet apart...We can't be near each other. We had to wear masks when we're not working and on camera," Kelly explains. But what's most annoying, she says, is that when a contestant joins her team, she's not allowed to jump up and hug them.

"I'm a hugger and you can't be like, 'Yay, you're on Team Kelly!' and then you just like, you know, high five in the air with 'em," laughs Kelly.

Another change, Kelly says, is that the gifts she gives her team every year have changed with the times.

"Every coach has their own little thing that they do when, you know, somebody becomes Team Kelly or Team Gwen, Team John, Team Blake, and mine has always been the Team Kelly jackets," she reveals. "But this year, because I not only care about you as a person, I care about your health, I got Team Kelly masks."

"They're really cute. They're purple with gold bedazzles," she laughs. "And [I'm] even...gonna make [the boys] wear [them], at least in one picture!"

Overall, Kelly says taping the show in these crazy times has made her and her fellow coaches appreciate the Blind Auditions round even more.

"We haven't really been able to listen to live music in person in, well, forever. So it was really cool, [during] the Blinds, I felt like we were having our own private concert," she explains. "So that was really, really special."