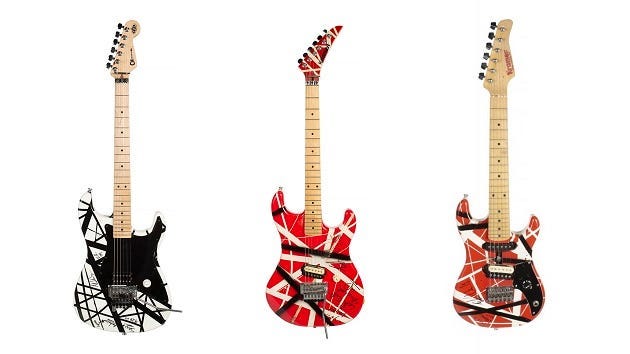 Three of the late Eddie Van Halen's iconic guitars fetched a total of over $422,000 when they hit the auction block on Wednesday.

Listen to your favorite Classic Rock now on the RADIO.COM.

The guitars were sold as part of the "Icons & Idols Trilogy: Rock 'N' Roll" sale, hosted by Julien's Auctions, which also featured memorabilia from Elvis Presley, Little Richard, Kurt Cobain, David Bowie, The Who, Fleetwood Mac, Bob Marley and others.

Van Halen's customized red Kramer electric guitar, that's embossed with white and black stripes on its body, fetched the highest bid of the night -- a whopping $231,250. The backstory of the guitar says Van Halen was gifted the instrument in 1991 by Bryan Cush, his close friend and the owner of Shreveport, Louisiana's Cush's Centenary Oyster House.

The Kramer, on which Eddie wrote the inscription, "Yo - Bryan...Let's get shucked up...Eddie Van Halen...5150," was put on display at the restaurant, and Van Halen would pick it up and play it whenever he stopped by the joint.

His 2004 EVH Charvel Art Series electric guitar went for $140,800, while the guitar prop that was played by child actor Bryan Hitchcock posing as a young Van Halen in the "Hot for Teacher" music video was sold for $50,000.

Another big ticket items was a black Fender Stratocaster guitar that Cobain smashed on stage and gifted to a fan in the audience during Nirvana's 1994 In Utero Tour, which fetched $153,600.

Another high-priced item was a Hammond B-3 organ, estimated to be from the mid-'60s, that was played by Gregg Allman. The instrument, which Allman took on tour with him between the 1980s and his final show in 2015, sold for $102,400.