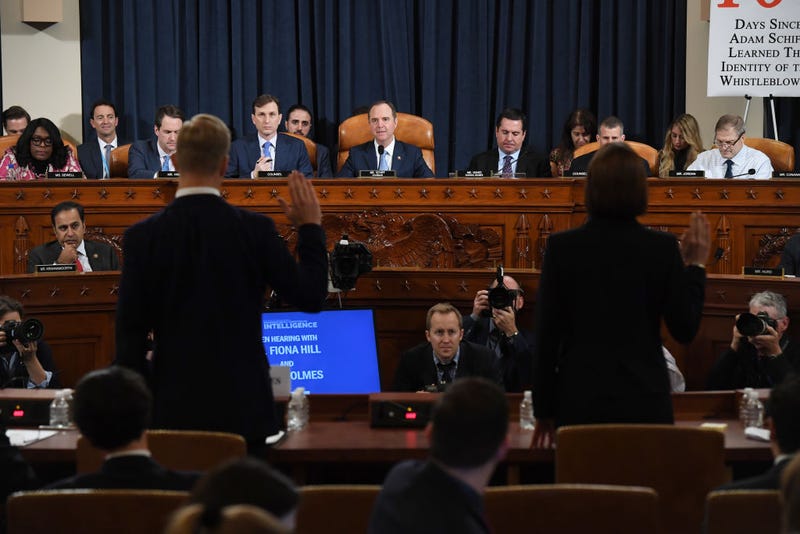 Two more witnesses are scheduled to testify publicly Thursday before the House Intelligence Committee as part of the impeachment inquiry into President Donald Trump.

Fiona Hill, a former National Security Council adviser, and David Holmes, a U.S. diplomat, will appear before the panel.

Click here to listen to the complete, uninterrupted impeachment inquiry.

Check back to this page for updates throughout the day from the KCBS Radio newsroom as Stan Bunger and Doug Sovern monitor the developments in Washington.

**All LIVE updates are in Eastern Time**

BAD, BUT NOT IMPEACHABLE

.@HurdOnTheHill makes clear he doesn't think what @realDonaldTrump did was right...but he thinks it falls short of an impeachable offense. #ImpeachmentHearings https://t.co/ygoaDzmAAQ

Republican Representative Chris Stewart of Utah has also forgone asking questions of the two witnesses, Fiona Hill and David Holmes. Hill responded to the speeches by Reps. Turner and Wenstrup by defending her credibility as a witness and thanking them for their "eloquent" comments, however both had left the room after their time was up and did not hear her response.

A rare moment of naked honesty from a member of Congress (please forgive my cynicism): Utah's @RepChrisStewart says he has no questions to ask or any points to make that haven't already been made.
And yet...he proceeds to decry the #ImpeachmentHearings & welcome their conclusion

NO QUESTIONS FROM TWO REPUBLICANS

Reps. Mike Turner and Brad Wenstrup of Ohio did not ask Hill or Holmes any questions. Turner used his time to criticize Fiona Hill for debunking the theory that Ukraine interfered in the 2016 presidential election, while Wenstrup spoke about the opposition President Trump has faced since his election. Wenstrup says his opponents need to move past "political hatred", reminding the committee of the shooting of a congressional baseball practice, which he survived. Wenstrup has also implied the impeachment inquiry is a "coup".

Ohio's @RepMikeTurner lays into #FionaHill, accusing her of misrepresenting members' beliefs on Russian election interference and dismissing her as another hearsay witness. He never asks her a question and uses his entire time before witnesses can respond #ImpeachmentHearings

Hill testifies that she was angry with E.U. Ambassador Sondland for not co-ordinating with her until she realized that a separate political mission was emerging.

"He was being involved in a domestic political errand, and WE were being involved in national security foreign policy," and those two goals had diverged, #FionaHill testifies about #GordonSondland's role in #Ukraine at #ImpeachmentHearings

Hill says she was angry with Sondland because, while National Security Council staff was working on "national security foreign policy," he was "being involved in a domestic political errand" https://t.co/cPja558vhl pic.twitter.com/mnzuW7hrcx

Hill also praised Lt. Col. Vindman's judgment and expertise on national security. In response to some of the criticisms that have been leveled against him, she says her only concern was that he may not have had the tenor and experience to manage what was turning into a delicate political issue.

Rep. Devin Nunes opened his questioning with the Christopher Steele dossier and inquiries into the 2016 presidential election.

.@DevinNunes has used his questions so far to revisit the 2016 #SteeleDossier and his counter-narrative on #Ukraine and the @HillaryClinton campaign. These witnesses don't have much to say on that front. #ImpeachmentHearings

After a two-hour break, the #ImpeachmentHearings are resuming. @DevinNunes and his counsel will get 45 minutes of questions, followed by the members of the committee

Still no resumption of the #ImpeachmentHearings. This break to allow members to go cast votes is approaching 90 minutes now. There's still about 3 hours of Q&A of today's witnesses, #FionaHill & #DavidHolmes, to go, which will push this hearing well into the afternoon.

Meanwhile, President Trump is having lunch with eight Republican Senators, who will soon have to weigh in on the hearings when the impeachment inquiry reaches the Senate.

Another way to put this: the defendant is lunching with 8 of his future jurors #ImpeachmentHearings https://t.co/ussEYsX2mB

Based on past experience, this break could easily last an hour. #ImpeachmentHearings

Fiona Hill spoke directly about her distinctive accent, and like other witnesses in these hearings (Lt. Col Alexander Vindman and Ambassador Marie Yovanovitch), paid homage to the opportunities afforded her by the United States. "I grew up poor with a very distinctive working-class accent. In England in the 1980s and 1990s, this would have impeded my professional advancement. This background never set me back in America."

In "Impeachment: The Movie," the part of #FionaHill will be played by Kristin Scott Thomas.#ImpeachmentHearings

For what it's worth, a week of televised hearings does not appear to have moved the polling needle in favor of impeaching President Trump. As FiveThirtyEight.com reports, self-described Democrats and Republicans remain deeply entrenched in their positions, while independents have actually moved a few percentage points AWAY from support for impeachment in the last week.

Although Adam Schiff and Devin Nunes differ on almost everything, they have this in common.

Reps Devin Nunes and Adam Schiff lead all other House members when it comes to cash on hand.

.@DevinNunes requests a "minority day of hearings," so that witnesses the GOP is demanding can be heard. Democratic obstructionism has been a consistent theme for Nunes & the GOP during these hearings. #ImpeachmentHearings

When Fiona Hill sits down before the House Intelligence Committee in a few minutes, she plans to take aim on one argument we've been hearing from Republican members. From her prepared opening remarks: "Based on questions and statements I have heard, some of you on this committee appear to believe that Russia and its security services did not conduct a campaign against our country—and that perhaps, somehow, for some reason, Ukraine did. This is a fictional narrative that has been perpetrated and propagated by the Russian security services themselves.