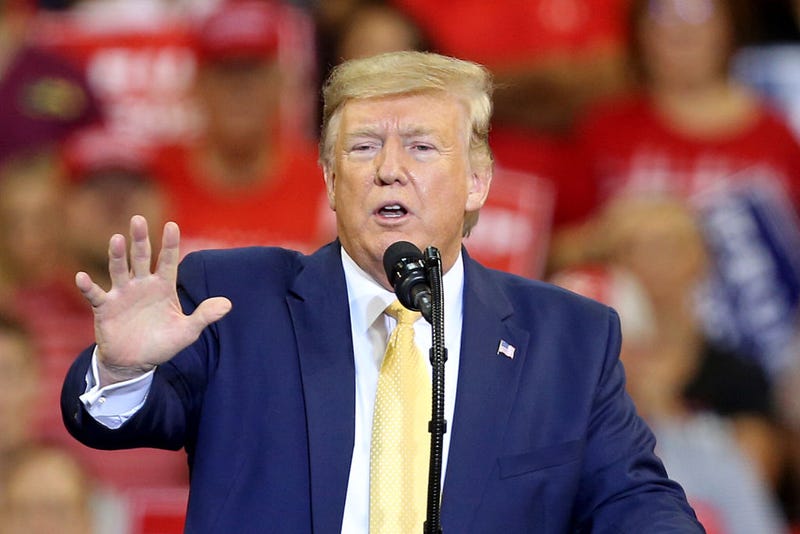 Public impeachment hearings continue Thursday with testimony from Fiona Hill, a former top Russia specialist on the National Security Council and David Holmes, a State Department aide, who was privy to a conversation between Gordon Sondland, the U.S. ambassador to the European Union and President Donald Trump on July 26.

Hill has reportedly said she had worries about the communication that Trump's former attorney, Rudy Giuliani had in connection to policies in Ukraine.

Sondland testified Wednesday morning, saying top administration officials were all in the "loop" when it came to pressuring Ukraine on investigations, and that he worked with the president's personal lawyer on the Ukraine policy.

Laura Cooper, a deputy assistant secretary at the Defense Department, and David Hale, the undersecretary of state for political affairs at the State Department,  are up next Wednesday afternoon.

Sondland revised his closed-door testimony from October earlier this month. He reportedly told an aide to Ukrainian President Volodymyr Zelensky that the aid the US was offering was tied to investigating the former Vice President and his son.

“Mr. Giuliani was expressing the desires of the president of the United States, and we knew that these investigations were important to the president,” Sondland said in his testimony Wednesday morning, saying President Trump's personal lawyer, Rudy Giuliani was pushing a "quid pro quo" with Ukraine.

He said he had kept all the top officials, including Vice President Pence and Secretary of State Mike Pompeo in the loop, raising concerns with Pence. With Pence, he said he was concerned that the aid offerd to Ukraine would be tied to the investigations into the Bidens.

"Everyone was in the loop," he said in his opening remarks Wednesday morning.

He also told investigators he hasn't had access to any State Department documents, calendars or phone records so his testimony has "not been perfect."

Sondland also denied participating in "some kind of rogue diplomacy."

Sondland also testified at first he didn't know why the Ukraine funding was in a "logjam," but later realized it was conditioned on Ukraine's president announcing an investigation into the 2016 US election, and energy company Burisma and the Bidens.

Lt. Col. Alexander Vindman, who sits on the National Security Council (NSC) and is the director for European affairs at the NSC, testified Tuesday along with Jennifer Williams, Kurt Volker and Tim Morrison.

Vindman listened in on the July 25 phone call between President Donald Trump and the Ukrainian president. Vindman said it was "improper" for Trump to demand a foreign government investigative a U.S. citizen and political opponent.

The hearing got heated at one point Tuesday when Rep. Devin Nunes appeared to be asking Vindman about the "whistleblower."

Vindman responds to Nunes addressing him as "Mr. Vindman":

"I want to make sure there's no effort to out the whistleblower through the use of these proceedings," Schiff says. https://t.co/JIcrYTMHmF pic.twitter.com/H7htcd9Xcx

“I found the July 25th phone call unusual because, in contrast to other presidential calls I had observed, it involved discussion of what appeared to be a domestic political matter,” Williams said, in her opening remarks.

Meanwhile, Kurt Volker, who testified Tuesday afternoon, said he now understands that President Trump was using aid to get Ukraine to investigate the former Vice President and his son. Volker is former special envoy to Ukraine. Tim Morrison, a former National Security Council aide, who also heard the July 25 phone call, also testified Tuesday. Morrison said his resignation from the Trump administration was voluntary and he was stating his own recollections and memories in this process.

During a Cabinet meeting on Tuesday, President Donald Trump slammed the hearings, calling them a “disgrace” and “kangaroo court."

There have been developments since last week's first live hearings with House Speaker Nancy Pelosi inviting President Donald Trump to testify in front of House investigators.

There will be more public hearings held on Thursday.

Our Crazy, Do Nothing (where’s USMCA, infrastructure, lower drug pricing & much more?) Speaker of the House, Nervous Nancy Pelosi, who is petrified by her Radical Left knowing she will soon be gone (they & Fake News Media are her BOSS), suggested on Sunday’s DEFACE THE NATION....

....that I testify about the phony Impeachment Witch Hunt. She also said I could do it in writing. Even though I did nothing wrong, and don’t like giving credibility to this No Due Process Hoax, I like the idea & will, in order to get Congress focused again, strongly consider it!

Last week former U.S. Ambassador to Ukraine Marie Yovanovitch testified for about five hours, telling Congress about a smear campaign against her from Trump allies. House Intelligence Committee Chairman Adam Schiff paused the testimony to bring up live tweets from President Trump who was critisizing the former ambassador on Twitter.

Everywhere Marie Yovanovitch went turned bad. She started off in Somalia, how did that go? Then fast forward to Ukraine, where the new Ukrainian President spoke unfavorably about her in my second phone call with him. It is a U.S. President’s absolute right to appoint ambassadors.

....They call it “serving at the pleasure of the President.” The U.S. now has a very strong and powerful foreign policy, much different than proceeding administrations. It is called, quite simply, America First! With all of that, however, I have done FAR more for Ukraine than O.

Republicans remained poised to defend the president amid this probe from the House Democrats, saying there weren't first-hand accounts of anything related to Trump and Ukraine nor did they speak directly to the president himself.

Bill Taylor, a top U.S. diplomat in Ukraine, who was second to testify, told House Intelligence Committee Chairman Adam Schiff that during a lunch with  Gordon Sondland, the U.S. ambassador to the European Union, his staff members overheard a conversation between Trump and another Sondland by phone, saying it sounded like the president cared more about the investigation into Joe Biden than Ukraine.

Schiff is leading the impeachment investigation and stressed he would protect the identity of the whistleblower.