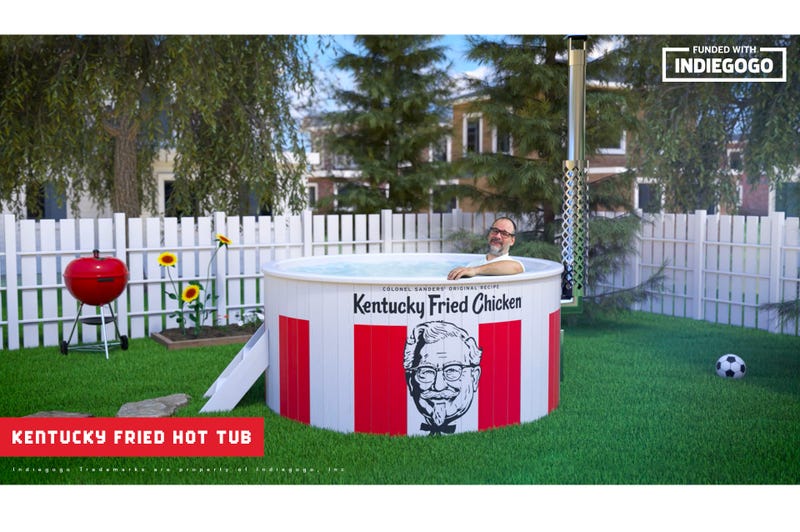 Few brands have mastered the viral marketing campaign like Kentucky Fried Chicken. Whether it’s the rotating cast of celebrity Colonels, a chicken scented yule log or the fried-chicken-as-a-bun Double Down sandwich (which, by the way, is almost a decade old now), KFC has found ways to get people talking about it in ways that have nothing to do with extra crispy buckets. Their latest viral turn involves crowd funding, a hot tub and a two-million-dollar ice show.

The KFC Innovations Lab is ostensibly the new hub for crazy products put out by the fast food giant. And in an attempt to give The People a voice in deciding what those crazy products should be, they’ve launched a number of IndieGoGo campaigns.

There are five live campaigns right now that include:

- The Kentucky Fried Hot Tub, which is a wood-fired hot tub shaped like a giant KFC bucket

- The Little Colonel Locator, which is a bow tie with a Bluetooth enabled GPS tracker

- Colonel on Ice, which is the life story of Colonel Harlan Sanders, done Ice Capades style

If all of these ideas seem like jokes to you, KFC urges you to reconsider that position. In fact, “Is this a joke?” is the very first question they answer under the FAQ for all five campaigns. The fried chicken powerhouse/wacky moonshot factory insists that they have done research and prototype development for all of the products its pushing. But the funding goals to bring them to life do make you wonder if KFC ever intends to actually make them available. Even the cardboard picnic table requires a contribution of more than $1000 to get your hands on one. And that’s only if the campaign hits more than $30,000 in total funding. But hey even if none of these ever come to market, somewhere there is actually a hot tub shaped like a chicken bucket now. Maybe that’s an achievement in itself.