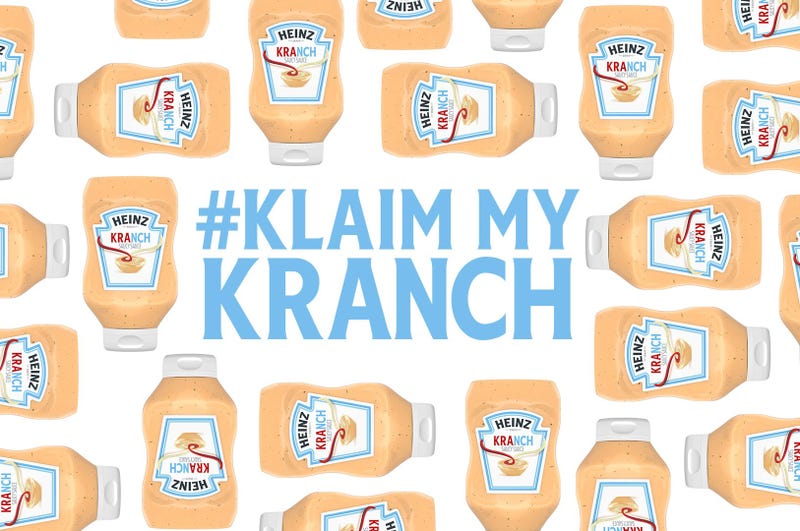 Heinz is in full can’t stop won’t stop mode. Last year it was mayochup (that would be mayonnaise and ketchup mixed up in a squeeze bottle). Last month it was mayocue and mayomust (of course, mayo and barbecue sauce and mayo and mustard). And now they are keeping it viral with their newest product: kranch. Yes, that is a mixture of ketchup and ranch. The thing about all of these is that they are combinations most of us have probably mixed up ourselves at home or some all you can eat buffet somewhere. Make no mistake: they’re good. But are you ready to buy something called kranch? Heinz is betting you are. The company is rolling out squeeze bottles of kranch throughout April which will sell for $3.49. (Just think, if you had to by both ketchup and ranch and mix them together it could end up costing you $4!)

But for the kranch fanatics or the passionately thrifty, Heinz is also giving away 100 bottles for free through an online contest. All you have to do to enter is find @heinzketchup_us on twitter and reply to the kranch tweet they pinned to the top of their page.

Kranch sauce is here! Reply with #KlaimMyKranch and #Sweeps and we might just give you one of the first 100 bottles. No purchase needed, rules in bio. pic.twitter.com/5UE53AGPbB

This isn’t even the first time in April that Heinz is holding a contest to win one of the wacky brainchilds from their development team. Just a couple days ago Lunchables, which is owned by Kraft Heinz, let Brunchables loose on the world, offering up free packages for 100 lucky winners.

Who knows, maybe you’ll be incredibly lucky and win some kranch to spread on Brunchable breakfast sandwich.