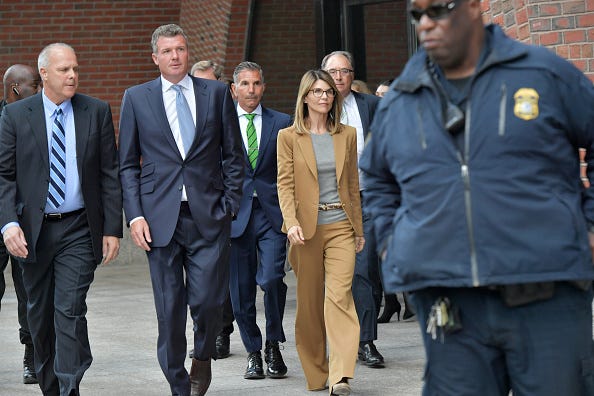 (KNX) There's word now that actress Lori Loughlin's two daughters are no longer attending USC after getting a lot of unwanted attention for allegedly getting into the university, thanks to bribes paid by their parents.

But it's not clear exactly when Olivia Jade Giannulli and Isabella Rose Giannulli left or what led up to their departures.

USC is saying only that they're not currently enrolled. The university released a statement Monday.  The university previously said it was reviewing the situations of all students who might have been improperly admitted.

Both Loughlin and her husband, Mossimo Giannulli,  are both allegedly accused of paying $500,000 to get their two daughters into USC.

There is information that Loughlin may take a plea deal after all rather than going to trial.

Prosecutors have been arguing all along that when actress Felicity Huffman's daughter got into college by having a proctor correct her SAT answers, somebody else was denied a spot and denied a chance to get into school. But that sentencing report says no that's not true so that could help Loughlin.

Harvey Levin, with TMZ, said prosecutors realize they might get the long sentence they're hoping for.

"If they take a case to trial, and they do all of this, they will run into the same roadblock, which is the probation department and the judge saying the same thing, which is nobody really lost anything as a result of what Lori or Felicity did and if they end up getting a three-week sentence, it's going to make the prosecution look bad," Levin told KNX 1070 News.

They would reportedly face up to 40 years in prison if convicted.

More than 30 parents were initially charged with conspiracy fraud in the spring in the college admissions scandal in a probe dubbed "Operation Varsity Blues" that spanned Ivy Leagues and other universities across the nation.

Loughlin and her husband fought the charges before pleading not guilty earlier this year to charges of conspiracy to commit money laundering.

According to CBS News, four other parents plead guilty in the college admissions bribery scandal this week.

CBS News said the four parents, Douglas Hodge, Manuel Henriquez, Elizabeth Henriquez and Michelle Janavs,  join 15 others who have pleaded guilty in the case, while 15 other parents are fighting the charges.