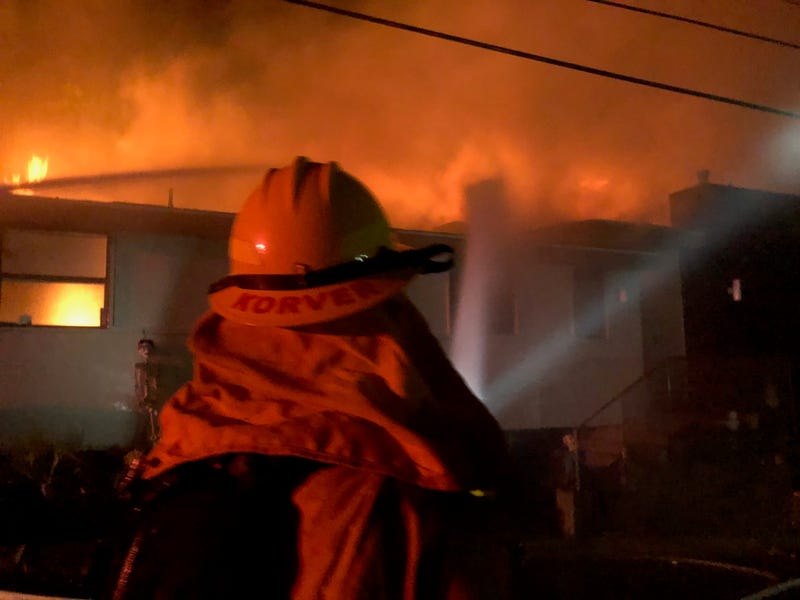 The Getty Fire has increased slightly overnight to 658 acres.

Containment remains at 5 percent. Firefighters have been focused on hot spots. All other evacuation orders still in place. The 405 freeway reopened Monday night but there is a traffic snarl everywhere Tuesday morning.

The southbound and northbound 405 Freeway is open through the Sepulveda Pass but extra heavy southbound as Sepulveda Boulevard remains shut down due to the Getty Fire.

There is threat of wind Tuesday night and the LA Fire Department has been urging people to evacuate in the event of a new fire disaster.

Residents won't be returning to their homes Tuesday night.

Gov. Gavin Newsom also announced a new state website with tools and resources for Californians who have been impacted by wildfires and utility-directed power shutoffs.

The website combines emergency response, recovery and resilience information into a single place for easy access by users. It is a one-stop portal that includes local and state resources, health services, shelters and housing, preparedness information, and more.

Firefighters were making some progress on the destructive Getty Fire Monday.

“We have a known threat tonight, with this wind event,” says @LAFD... urging people to be prepared to evacuate in the event of a new fire disaster. #GettyFire pic.twitter.com/xOQmV1ge3Q

Mayor Eric Garcetti says some of the recent "extended" evacuation areas have been lifted.

Mountaingate Community residents just south of Mulholland Drive can go back now. Residents must show an ID to access their homes.

Earlier on Monday, mandatory evacuation orders have been lifted in the area between Sunset Boulevard and PCH from Temescal Canyon Road to Chautauqua Boulevard. Garcetti says evacuation orders are expected to remain in place for all other areas, and residents should plan to remain away from their homes for at least two days, given the forecast for more winds in the area.

During a press conference Monday afternoon, officials said both north and southbound 405 freeway was set to be reopened sometime soon Monday late afternoon.

The fire has burned 618 acres so far and it is five percent contained. About 10,000 structures (both residential and commercial) have been evacuated on Monday. Five homes in Tiger Tale that have been lost. There will be no repopulation of residents Monday night, according to the officials during the press conference. Eight homes have been destroyed and another six have been damaged, according to Mayor Eric Garcetti in the press conference Monday afternoon.

All Los Angeles Unified School District campuses that were closed today will be closed again Tuesday.

Flames & smoke are still clearly visible next to the southbound lanes of the 405 freeway in the Sepulveda Pass. #GettyFire pic.twitter.com/X3RpSP6kG1

Thousands of people though are still under evacuation orders and five shelters have been set up. The Getty and Skirball Center are both closed, but safe.

DWP and SoCal Edison are reporting precautionary outages both in the evacuation areas and throughout LA County involving nearly 6,000 people.

As of Monday afternoon, mandatory evacuation orders have been lifted:

More than 3,000 homes are threatened and a mandatory evacuation order is in effect from Mullholland on the north, all the way to Pacific Palisades on the south.

The California Highway Patrol has now closed the southbound San Diego (405) Freeway from the Ventura (101) Freeway in Sherman Oaks to Sunset Boulevard.

The connectors from southbound 405 from westbound and northbound 101 and eastbound/southbound 101.

-Topanga Canyon Boulevard State Route 27 is open to all traffic.

There are hundreds of firefighters on the lines and schools in the area are closed.

The LAFD also ordered students to evacuate from Mount Saint Mary's University at 12001 Chalon Road. Evacuations were also ordered for 200 people in a care facility next door.

Classes were suspended today at Mount Saint Mary's Chalon Campus in Brentwood as well as at the Doheny campus, which was not reported threatened by fire.

Getty Fire . 500 plus acres, anywhere from 5 to 15 homes damaged or destroyed. Air power and ground forces being used to stop fire spread to the West into areas that haven’t burned since the 1979 Mandeville Canyon Fire. @KNX1070 pic.twitter.com/a9MxHH2Bep

EVACUATION WARNING: Mulholland to the North, Topanga Canyon to the West, Sunset to the South and Sullivan Fire Road to the East.

ROAD CLOSURES: FULL closure of the SB405FY from Valley Vista to Sunset 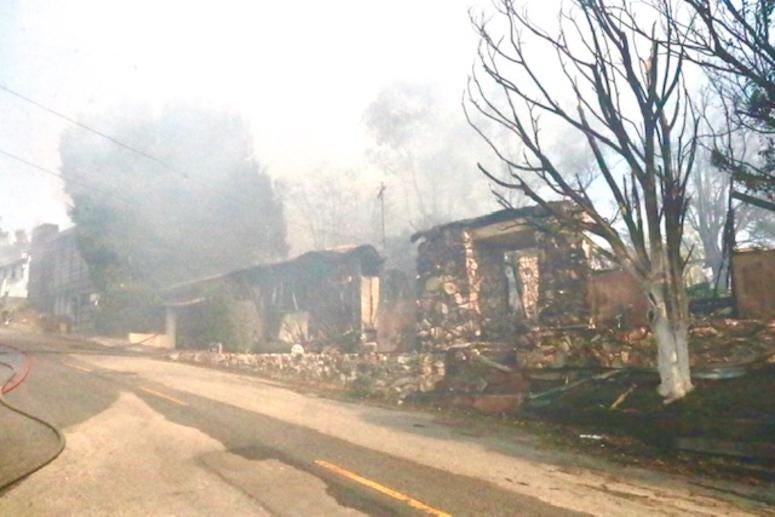