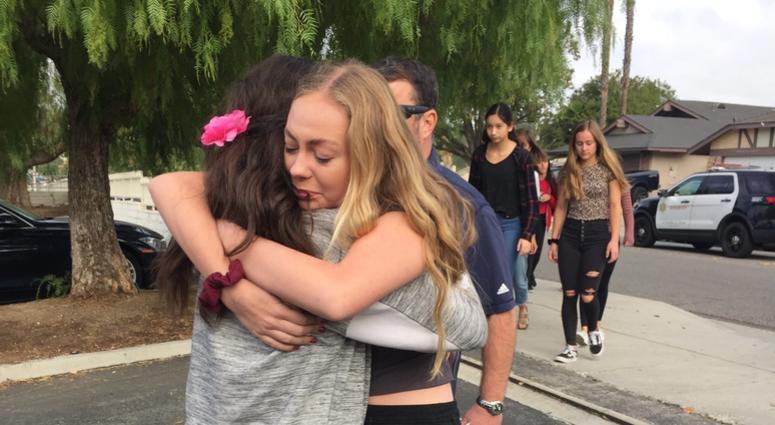 The suspect in the Saugus High School deadly shooting has died Friday afternoon.

On Friday officials identified one of the victims: Gracie Anne Muehlberger, 15, who died after being rushed to Henry Mayo Hospital.

She died Thursday morning. She was initially reported as being 16-years-old on Thursday.

On Friday, authorities announced that two of the survivors who were shot will be released.

Six victims were injured, and two died, in a school shooting at Saugus High School in Santa Clarita Thursday morning.

One victim was a 14-year-old male and the other was Muehlberger, according to authorities this week.

Muehlberger's family set up a GoFundMe page in honor of her memory:

The suspect was in critical condition until he died Friday.

SANTA CLARITA SHOOTING: So fantastic to see this smiling face! Addison’s dad is sharing this photo — his daughter, shot yesterday at Saugus High School, should be released in the next day or two, according to trauma surgeons. ❤️🙏🏻 #abc7eyewitness pic.twitter.com/vf68lGs5o9

The alleged shooter has been identified as 16-year-old Nathaniel Berhow, and CBS News has confirmed he is in grave injury following the shooting of a self-inflicted gunshot to the head.

Sheriff's investigators are working with the F.B.I. on the case. Authorities announced they will be searching the suspected shooter's house. There has been no motive for the shooting.

Officials announced that the school district will be closed Friday in light of the tragic shooting.

Governor Newsom offered his condolences, tweeting, “I’m angry about it because I just don’t want to be repetitive and express condolences – of course we do, it’s devastating - but what do you say to the parents that are scared to death.”

“I’m angry about it because I just don’t want to be repetitive and express condolences – of course we do, it’s devastating - but what do you say to the parents that are scared to death.”

Gun deaths do not have to be the norm. #SaugusShooting pic.twitter.com/eiYwkG4bDt

— Office of the Governor of California (@CAgovernor) November 15, 2019

Former Vice President Joe Biden was in Los Angeles Thursday and told a gathered crowd, "I’m so tired of talking about prayers. We need to do something to protect these children."

Frmr. VP Joe #Biden speaking at LA Trade Tech right now: “I’m so tired of talking about prayers. We need to do something to protect these children.” #Saugus ⁦@KNX1070⁩ pic.twitter.com/T5rby3qowY

Later in the day President Trump tweeted his condolences.

We continue to monitor the terrible events at Saugus High School in Santa Clarita, California through our ongoing communications with Local, State, and Federal Authorities....

....We send our deepest condolences to the families and friends of those tragically lost, and we pray for the speedy recovery of the wounded.

Authorities said there were a total of six victims who were promptly triaged and transported to local hospitals. Among those that were transported was the suspect, who is in grave condition. He is 16-years-old and a student at the school.

Authorities said a search warrant was issued to the suspect's home. The suspect's birthday was today and he allegedly used a 45-caliber semiautomatic pistol.

The mother and girlfriend of the suspect are currently being questioned by the authorities.

The suspect is in custody and is being treated at a hospital, according to LASD Sheriff Alex Villaneuva who spoke to KNX 1070 Thursday morning.

All lockdowns have been lifted.

Message from the @HartDistrict: there will be a gathering tonight from 5-7PM for those affected by the #SaugusHigh shooting.

Counselors will be there. Everyone is welcome. #SantaClarita @KNX1070 pic.twitter.com/ff9LdvRiJd

#SaugusHighShooting: UPDATE - We have four patients; Three male and one female. Female and two males are in critical condition. One male is in good condition.

LASD Deputy Eric Ortiz told KNX Thursday morning the reunification area is Central Park on Bouquet Canyon, adding to let the parents know "that the kids are safe because the schools are on lockdown."

LASD revised that later on Thursday morning asking parents and the public to move to the south end of the park as a reunification point, past the Santa Clarita Community Gardens towards sports fields one through four.

There is a second reunification center at Bouquet Canyon Church.

On Thursday morning, the City of Santa Clarita wrote on Twitter "with the exception of Arroyo Seco and Saugus, ALL school lockdowns have been lifted."

#SaugusHighShooting: We have received 2 patients in critical condition, 3 en route. We will provide updates as they become available.

The school is on lockdown