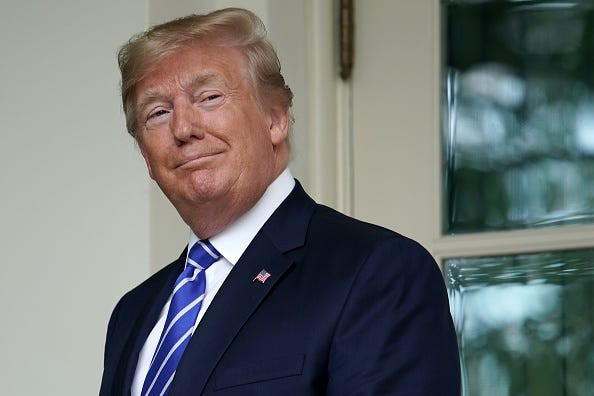 The order direct agencies including the Federal Communications Commission and the Federal Trade Commission to study whether they can place new rules on the likes of Twitter and Facebook.

But critics say it'll be tough to enforce anything without an act of Congress, though.

"We're here today to defend free speech from one of the greatest dangers it has faced in American history, frankly, and you know what's going on as well as anybody. It's not good," Trump said.

He continued, "A small handful of powerful social media monopolies controls a vast portion of all public and private communication in the United States and we know what they are, we don't have to name them, we're going to give you a complete listing. They've had unchecked power to censure, restrict, edit, shape, hide, alter virtually any form of communication between private citizens or large public audiences."

Trump also took the opportunity to take aim at the Democrats.

"We can't let this continue to happen, it's very, very unfair and you look at the statistics and you look at what is going on and I think everybody would very much agree with that -- including Democrats, by the way," he said. "I saw quite a few Democrats are saying this is about time something is done, so let's see if they keep that decision after they hear that we agree with them."

Trump also said Twitter is not neutral since its makes "editorial decisions."

Trump tweeted that Twitter was "stifling FREE SPEECH” and vowed to take action.
Hours before signing the executive order on Thursday, Trump double-downed on his attacks, calling the fact-checking labels "so ridiculous."

So ridiculous to see Twitter trying to make the case that Mail-In Ballots are not subject to FRAUD. How stupid, there are examples, & cases, all over the place. Our election process will become badly tainted & a laughingstock all over the World. Tell that to your hater @yoyoel