Trump had said he would choose a woman to replace the seat left by Justice Ruth Bader Ginsburg, a liberal icon who died last Friday at 87. Barrett was seen as his most likely choice.

"Over the past week, our nation has mourned the loss of a true American legend. Justice Ruth Bader Ginsburg was a legal giant and a pioneer for women. Her extraordinary life and legacy will inspire Americans for generations to come," Trump said.

"Now we gather in the Rose Garden to continue our never-ending task of ensuring equal justice and preserving the impartial rule of law," he continued. "Today it is my honor to nominate one of our nation’s most brilliant and gifted legal minds to the Supreme Court. She is a woman of unparalleled achievement, towering intellect, sterling credentials and unyielding loyalty to the Constitution—Judge Amy Coney Barrett." 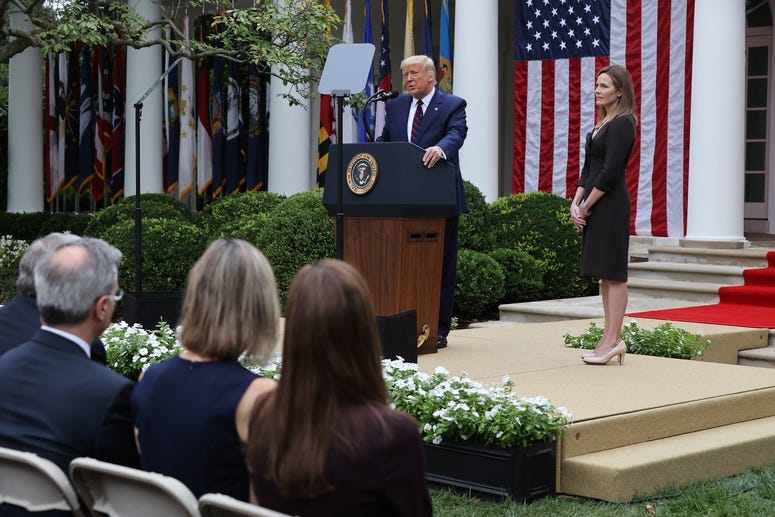 Trump stood beside Barrett as more than 100 people gathered in the newly remodeled Rose Garden for the announcement. American flags were hanging along the colonnade and patriotic music was playing through the PA system.

After touting Barrett’s judicial record, Trump alluded to the congressional fight to come in the weeks ahead. “This should be a straightforward and prompt confirmation. It should be very easy. Good luck. It’s going to be very quick. I’m sure it will be extremely noncontroversial,” he said.

Barrett, 48, was joined by her seven children and husband, Jesse, as Trump made the announcement. She would be the fifth woman and the first mother of school-age children to serve on the high court.

"I am truly humbled by the prospect of serving on the Supreme Court," Barrett said. "Should I be confirmed, I will be mindful of who came before me. The flag of the United States is still flying at half-staff in memory of Justice Ruth Bader Ginsburg to mark the end of a great American life."

"I have no illusions that the road ahead of me will be easy, either for the short-term or the long haul," she continued. "I never imagined that I would find myself in this position. But now that I am, I assure you that I will meet the challenge with both humility and courage."

Democratic presidential nominee Joe Biden reacted to the news minutes after the announcement, saying in a statement that Barrett "has a written track record of disagreeing with the U.S. Supreme Court’s decision upholding the Affordable Care Act. She critiqued Chief Justice John Roberts’ majority opinion upholding the law in 2012." (Read the full statement below.) 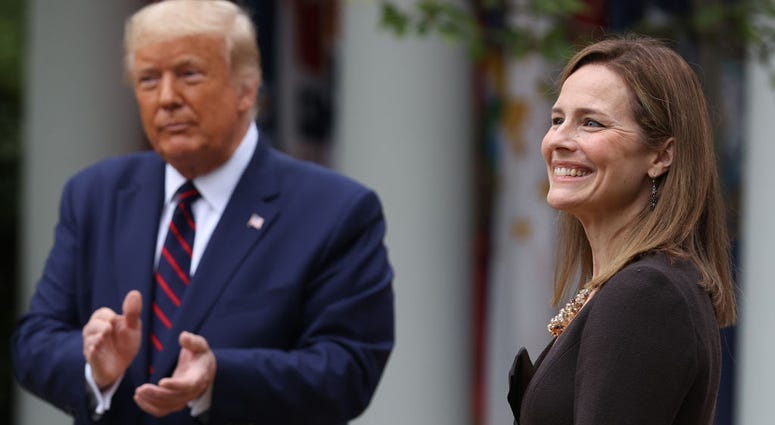 There has been multiple reports that Trump would chose Barrett, who currently serves as a judge on the 7th Circuit Court of Appeals.

Trump was coy with reporters Friday evening when they asked him if the reports were true.

"I haven’t said that -- they're all great," the president said after disembarking from Air Force One at Joint Base Andrews.

"I haven’t said it was her, but she is outstanding,” he said of Barrett.

Trump’s nominee would mark a conservative shift in the makeup of the court if confirmed.

Justin Clark, the deputy campaign manager of Trump 2020, said in response to the nomination: “Judge Amy Coney Barrett is a strong, vetted Constitutional textualist, who previously received bipartisan support in the Senate, and will bring honor to the Supreme Court. She will be an independent voice on the Court to protect Americans’ fundamental rights, including religious freedoms and Second Amendment rights. Judge Barrett is an excellent selection by President Trump and should be confirmed by the Senate in short order. The Senate must confirm her to restore the Court to its full complement of nine Justices to hear and decide cases of importance sure to come in the near future.”

With the 2020 presidential election just weeks away, conservative groups and Republicans in Congress hope for a speedy confirmation process. Democrats have promised a fight.

The Democratic Attorneys General Association (DAGA) Co-Chairs, Massachusetts AG Maura Healey and Oregon AG Ellen Rosenblum, released a statement: “The nomination of arch-conservative Judge Amy Coney Barrett should alarm anyone who cares about the future of this country. Everything is on the line—health care, marriage equality, the right to abortion, worker protections, access to the ballot box, and so much more. The American people deserve to be heard. To every member of the Senate: find your backbone, buck (Sen. Mitch) McConnell, and let the people vote first."

Read Joe Biden's full statement in reaction to the nomination:

"Election Day is just weeks away, and millions of Americans are already voting because the stakes in this election could not be higher. They feel the urgency of this choice – an urgency made all the more acute by what’s at stake at the U.S. Supreme Court.

President Trump has been trying to throw out the Affordable Care Act for four years. Republicans have been trying to end it for a decade. Twice, the U.S. Supreme Court upheld the law as constitutional.

But even now, in the midst of a global health pandemic, the Trump Administration is asking the U.S. Supreme Court to overturn the entire law, including its protections for people with pre-existing conditions. If President Trump has his way, complications from COVID-19, like lung scarring and heart damage, could become the next deniable pre-existing condition.

The American people know the U.S. Supreme Court decisions affect their everyday lives. The United States Constitution was designed to give the voters one chance to have their voice heard on who serves on the Court. That moment is now and their voice should be heard. The Senate should not act on this vacancy until after the American people select their next president and the next Congress."