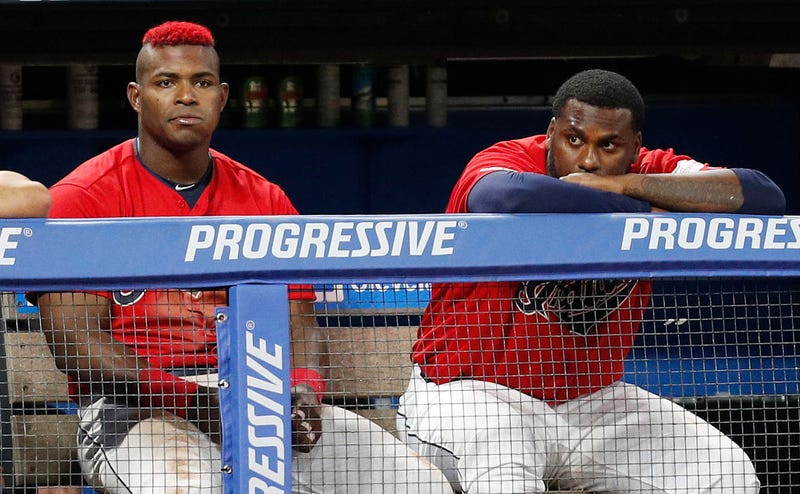 (92.3 The Fan) – Terry Francona sat down in the multipurpose room at Progressive Field on Saturday and answered questions from the media like he always does before a game.

Francona was in a good mood – cracking jokes, smiling and genuinely enjoying the conversation. He has plenty of reasons to smile, which is all a baseball manager can ask for in August.

There are only a few teams who have a legitimate chance to compete for the World Series and the Indians have gone from an afterthought, to the best team in Major League Baseball over the past two months. They enter Saturday night’s game against the Angels with a 36-16 record since June 1, which is the best in baseball.

Francona got some new toys to play with this week in Yasiel Puig and Franmil Reyes. There were some questions about how the newcomers would fit in with the rest of the team, but it doesn’t look like it’s going to be an issue.

Puig and Reyes joined Carlos Santana and José Ramírez in the clubhouse on Saturday. Puig sat on the floor, while the other three had chairs. The group joked, chatted and looked like they had been teammates all season long. Francisco Lindor walked in and greeted all four of his teammates like they had been playing together for years. The conversation lasted for several minutes and could’ve continued well beyond the ‘open’ period where media is allowed in the clubhouse.

“I’ve always felt like our guys do an amazing job of embracing people quickly and making them feel like us,” Francona said. “As long as you want to win and they know that, they do a really good job of that.”

Puig and Reyes both made it clear that they want to win in Cleveland. The lineup looks much different with them in it. Puig is the versatile cleanup hitter the Indians have been searching for all season and Reyes is a big, physical specimen who leads with 27 home runs.

“It’s his first time moving on, but he’s such a good kid that everybody warms up to him right away,” Francona said.

This team has chemistry. Nick Goody will challenge anyone to a game of Ping-Pong and talk trash the entire time – most of the time he backs it up. Zach Plesac and Mike Clevinger have gotten close over the past few months. They’re locker mates, which helps, but they’re more than just teammates who see each other at the ballpark.

This organization has an established culture and the idea of Puig disrupting it was silly to begin with, but it’s even wilder when you see how much his teammates like him.

“He plays with a lot of passion,” Francona said. “If I was a fan, that’d be one of the guys, if I was hungry, I’d wait until he hit because you want to see what he’ll be able to do.”

It won’t always be pretty with Puig, who is going to push the limits and remain aggressive at every turn. He was thrown out at home on Thursday night, attempting to score on a fly ball to shallow right field. Most players wouldn’t have tried it, but that’s how Puig has played his entire career.

The good certainly outweighs the bad, especially with someone as talented as Puig. The Indians know he’s going to get picked off, like he did in the first inning of Saturday night’s game against the Angels. They know he’s going to miss the cut off man at times. But the athleticism, passion and talent make it all worth it, especially since he knows he has a legitimate shot at making another run in October.

“He gets excited about what’s going on here and if you get the very best of Puig, you might be getting one of the better players in the game,” Francona said.

The Indians have done a great job of building a lineup that can carry the team when they need it. This team is going to need to produce runs against quality pitching in the playoffs.

They gave up Trevor Bauer, which may hurt them until Corey Kluber comes back, but it gives them a legitimate shot to have success in October, which would’ve been much harder without the additions of Puig and Reyes.

“There’s not any holes in that lineup,” Mike Clevinger said. “When you face a lineup like ours, like when you go against the Yankees and Boston, you’re doing almost max-effort, high-intensity pitches with nobody on base the entire game, let alone when somebody gets on base. That plays a huge role on wearing down a pitcher mentally. That’s probably the first thing that goes, especially if you’re in good shape.

“It’s big time for us, especially going down the stretch.”

The Indians’ clubhouse is just fine with Puig and Reyes. They hope the two big bats will do more than just fit in – they want to bring a championship to Cleveland.