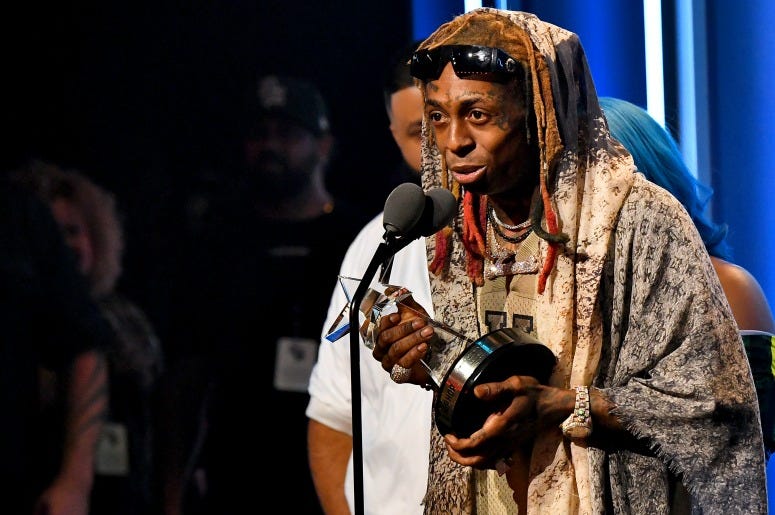 Since his first album in 1999, Lil Wayne has been one of the biggest forces in hip hop. Through twelve studio albums, over twenty mixtapes, and too many collaborations to count, Weezy has remained an influential, dominate voice in the game. The style has been refined, the topics have gotten more personal, and the fire remains for one of the world's greatest MCs. For that, and a thousand other reasons he was honored with the I Am Hip Hop Award at the 2018 BET Hip Hop Awards Tuesday night.

He told the story of man known as Uncle Bob, who found him after his childhood self-inflicted gunshot wound and got him to the hosptial. "He brought me to the hospital himself. He refused to wait, he kicked in the doors and said you get whatever you got to do and you make sure this child make it."

"He refused to leave, he stayed and made sure that I made it."

Lil Wayne joins past winners of the award like Snoop Dogg, Scarface, Rakim, and Ice Cube.

The other big award winners for the evening were Childish Gambino who won Best Video, Drake who won Hot Ticket Performer, and The Carters who took home Album Of The Year. The night's biggest winner though was Cardi B, who won four awards and had one of the biggest performances of the show.

The night also included a tribute to Mac Miller from Anderson .Paak, a big performance from Flipp Dinero, and T.I. performing with Yo Gotti. Vic Mensa also delivered some controversial bars about XXXTentacion. You can check out some more of the highlights below.