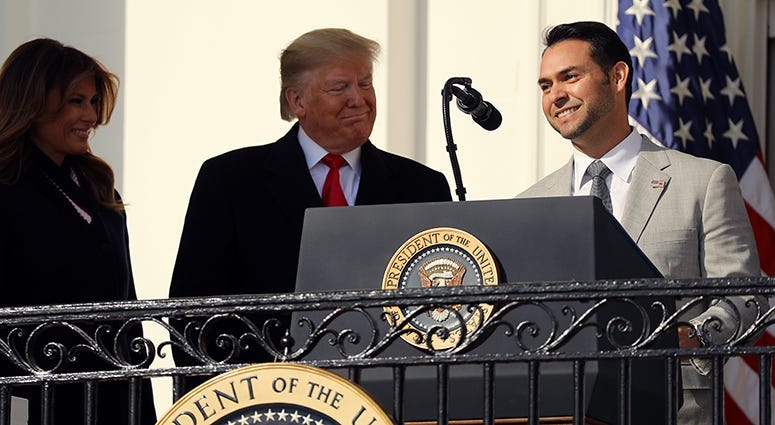 We're getting closer to the 2018 CMA Awards, and all eyes are on the Entertainer Of The Year award. Without Garth Brooks in the running, is this the chance for Luke Bryan to reclaim the crown? Maybe it's finally time for Chris Stapleton or Jason Aldean to shine in the top spot. Or is this the year for Kenny Chesney, who hasn't won since 2008. Or wait, maybe it will be Keith Urban who hasn't taken home the top prize since 2005! This is so stressful, and we need your help.

Rather than rush to into something we'll both regret, let us take a look at the amazing 2018 each of these artists has had.

Luke came roaring back this year with What Makes You Country, debuting at number one on the album charts. Songs like "Light It Up" and "Sunrise, Sunburn, Sunset" helped warm up even our coldest Christmas days. Meanwhile he became the first country star to headline at Dodger Stadium and he joined a little show called American Idol.

After being a part of the most tragic of nights, Aldean has had a lot to overcome. The singer came back with his own number one album, Rearview Town. It was his fourth album in a row to hit the top spot, making him only the second in country music to hold the honor. He also embarked on the massive High Noon Neon Tour which made its way around the country with some help from Luke Combs.

There was a time when there was no touching Kenny Chesney, winning four consecutive Entertainer Of The Year awards. His last top honor was in 2008. Since then he's been a nominee plenty of times, but something feels extra special about 2018. Ten years later Chesney seems reenergized on his Trip Around The Sun tour and his seventeenth album Songs For The Saints. The "Get Along" singer sings about coming together and rebuilding, and this just might be the time for a return to the top.

Ten albums deep, and Keith Urban is still reinventing and exploring new territory. Graffiti U inspired a new era for Urban, and a world tour, straddling influences both classic country and the best in pop music. He made a big splash when he debuted "Female" at the awards in 2017, and would make an even bigger statement by winning Entertainer Of The Year in 2018.

The 2017 Male Vocalist Of The Year kept his hot streak going in 2018, with a new album called From A Room: Volume 2. The album hit number two and scored mountains of critical acclaim. Stapleton likely has a room full of CMAs, but has yet to capture the big one. The GRAMMY winner hit the road again with his All-American Road Show and shows no signs of slowing down.

So there you have it, your 2018 nominees for Entertainer Of The Year. Now that we talked things out, we're even more torn than before.

Help us out and vote below for who you think should walk away with the top award of the night. We'll find out for sure when The 52nd Annual CMA Awards happen live from Nashville on Nov. 14. The show will take place at 8:00 PM ET on ABC, hosted by Carrie Underwood and Brad Paisley.

Cast your vote, and make sure to check back here for more exclusive interviews and more from behind-the-scenes of the 2018 CMA Awards.