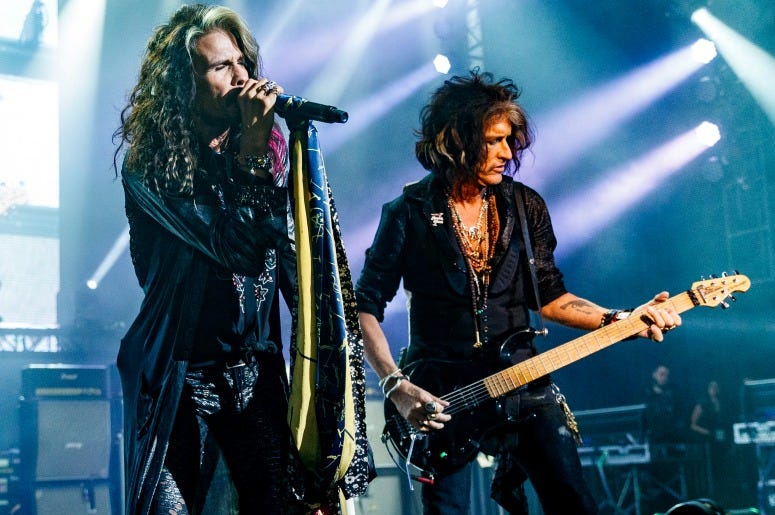 On the verge of 50 years together, Aerosmith has been celebrating this summer with a one-of-a-kind Las Vegas residency. Aerosmith: Deuces Are Wild is a tour of the band's career, from the early days in Boston to the title of top-selling American hard rock band. It's a long career and a lot of living to squeeze into one show on the strip, but the band has been up to the task.

This week Aerosmith starts another run of dates at Park MGM in Las Vegas, with plans to bring the show to the east coast this August as well. You can find the full list of upcoming events here.

Before he returns to the stage, we got to talk with guitarist Joe Perry about how the shows have been going, which Aerosmith song he thought would be bigger, and his guitar that is now on display at the Met Museum.

With fifteen studio albums and five decades of music to choose from, there's plenty to pick for a career-spanning setlist. The band has had nine number ones and twenty-four top ten hits along the way, but Perry tells us that there is a few that got away. Songs that Perry and Steven Tyler were sure would be bigger, but they weren't.

"I can remember writing a couple of different times, writing the songs with Steven, and looking at each other going, 'this one's gotta work'" Perry explains. "This one's got everything it's suppose to have. It's got a chorus you can sing along with, it's got a tempo that would work really well when we play it live, the riff kinda hangs together and is kind of a hook of its own. All the little elements that you try to put into a song to make it a song. To make it entertaining and putting across what we're trying to get everyone to feel. I can name a couple of them, and they fall flat on their face, and you're going, 'what the hell?'"

When pressed on the first one that pops into his mind, Perry is ready without hesitation. "Probably the song 'Get A Grip'" he says, referring to the title track from their 1993 top-selling number one album.

"We worked on that one out at Long View Studio in Western Mass" Perry recalls. "I can remember staying up in the loft with Steven and we were working on some different things. I think he was playing the drums or playing keyboards and I was playing the guitar. We said, 'this riff is gonna work. This has got it.' We went out and played it, we named the record after it, and other songs turned out to be the winners. This particular one, we played it live a couple times and it just laid there flat. We discovered there were other songs people would rather hear."

LAS VEGAS!!!! Are you ready for the return of Aerosmith at @ParkTheaterLV? Were BAAAAAAACK! June 19th. For tickets, VIP packages and more visit: https://t.co/rsuutHrYmY

Aerosmith would land 4 Top 40 hits from Get A Grip, with the title track not being one of them. A few are featured in Aerosmith: Dueces Are Wild, a show that Perry explains as a mix between the grit of an Aerosmith show and glam of Las Vegas.

"So far it's worked. The audiences seem to really like it, and I don't see anybody leaving during the show. That's always a good sign" he says. "It's working I think. Trying to get that match-up between keeping the essence of what the band is and circling it with a high-quality, Las Vegas type show."

"It's something that I don't think anybody's done before, any other rock band has done. There's been a lot of pop acts and a lot of other types of entertainment that have put up amazing shows that you'd want to come back and see again and again, and I think that was the challenge. Trying to do that, and still keeping the energy of a classic rock n' roll show."

You can hear much more from Joe Perry, including the history of his guitar on display at the Met Museum, in the interview above.

Aerosmith: Dueces Are Wild returns to Las Vegas on June 19th, with the show starting a run of east coast dates on August 8th. You can find the full list of upcoming events here.