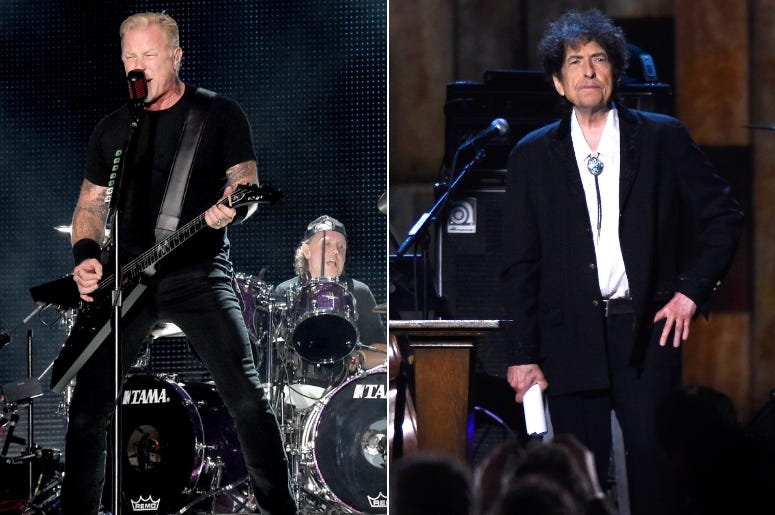 So, we just finished our holiday wish list. Two of music's most important artists have released remastered and expanded editions of landmark albums today.

Metallica unboxed a deluxe edition of 1988's ...And Justice For All, while Bob Dylan revisited the archives for 1975's Blood On The Tracks. Each of these albums are crucial to the career of their respective maker, and now come with more material than you'll ever know how to listen to.

...And Justice For All was a breakthrough for Metallica, and helped cement their legacy as the one of the greatest metal bands of all time. The album scored the band their first GRAMMY Award, and transitioned them from thrash to something heavier and more complex. Justice became the bridge to the band's biggest success. It was also the start of a new era with bassist Jason Newsted, and featured the building blocks to a major mainstream crossover.

The maturing of Metallica is fully explored in a deluxe reissue for the album's 30th anniversary. Inside are videos, interviews, unreleased demos, live concert footage and recordings, and a book full of never-before-seen photos.

Blood On The Tracks is a beloved Dylan album, partly because of his intensely personal songwriting in a less accessible era for the singer. Jakob Dylan has described Blood On The Tracks as his "parents talking", and the confessional effort of Dylan painted an honest picture of a struggling relationship. Dylan has denied it's as autobiographical as everyone wants it to be, but there's no denying the significant songs featured here. Tracks like "Tangled Up in Blue" and "Shelter From The Storm" have stood through time because of the sincerity of a then 33-year-old Bob Dylan.

For the 14th edition of his long-running bootleg series, Dylan and company swept up the tape from the Blood On The Tracks sessions to offer More Blood, More Tracks. The collection culls together alternative takes and rarities from the six sessions in New York and Minneapolis for the album's recording. Also included is a hardcover reproduction of one of Dylan's notebook's from the era.

It's tough to decide which we would rather listen to, so we have taken out a loan and have taken off work for the next week. We'll see you on the other side.

You can get More Blood, More Tracks here, or Metallica's expanded ...And Justice For All here.