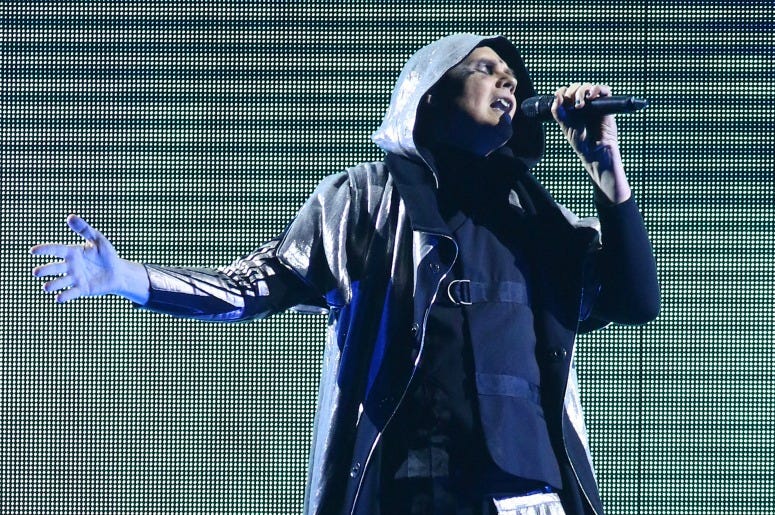 There has been a lot of ups, and downs, and trips to Disneyland for Billy Corgan and The Smashing Pumpkins over thirty years.

However, lately it seems like everything has been coming up Corgan as the band has released a blazing new single and they are on the road having fun with their Shiny And Oh So Bright Tour.

Thursday night was a special stop on the tour though for The Smashing Pumpkins as they invited along a busload of rock stars to help them celebrate their thirtieth anniversary.

Deftones singer Chino Moreno was there. Peter Hook of Joy Division, Davey Havok of AFI, and Dave Keuning and Mark Stoemer of The Killers were also there. But the true standout stars of the evening were Mark McGrath of Sugar Ray and Courtney Love of Hole.

Mark McGrath has been a part of the Shiny And Oh So Bright Tour in video cameo form during its run, but on Thursday he took the stage and sang “Fly” with The Smashing Pumpkins playing along.

Billy Corgan clapping along to “Fly” has replaced any negative image of Billy Corgan we’ve ever seen. He had such pure joy for the twenty-year-old summer anthem.

“I think I speak on behalf of everybody here tonight, thank you for the thirty years of music” said a thoughtful McGrath after the song. “You became the Brian Wilson of my generation my friend, I say that on bended knee.”

As impressive as that is, it’s tough to top a reunion with Courtney Love.

“We’ve made love, we’ve not made love, we’ve made up, we’ve broken up, but we’re back together again” said Corgan as he called Courtney to the stage. “I love this man with all my soul” returned Love before playing a few huge Hole songs.

It’s so nice to see everyone getting along. Here’s to another thirty years for the Pumpkins, may you always be as happy as during those five minutes of “Fly”.