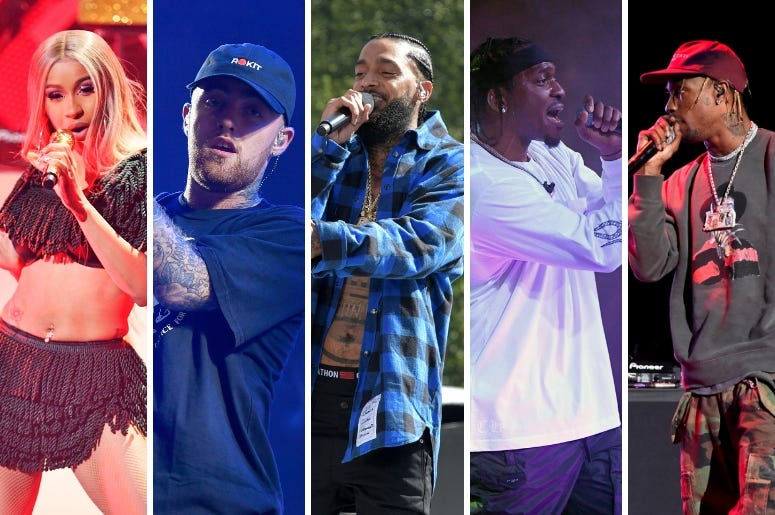 The imprint of Hip Hop is apparent across the board for the 61st Annual GRAMMY Awards. Artists like Cardi B, Kendrick Lamar, and Drake are a major force in the biggest categories of the night, and the impact of the art form is represented from Album Of The Year on down.

It's a beautiful statement on the genre's importance and influence throughout music as a whole, and it's only more encouraging when you drill down into the Best Rap Album category. Every corner of the game is represented in these 5 nominees, from pop supremacy, to street hustling soundtracks from both coasts, to conceptual and spaced-out boundary-pushing music that made a big mark last year. Here's a list of this year's nominees.

Cardi B made a cultural splash in 2018, demanding attention and becoming one of the biggest stars in music. The culmination of it all is Invasion of Privacy, an album that's diverse and reflective of a dexterous, dangerous artist. Cardi makes space for the classic New York flows she came up on, the trap beats of the moment, and slick, polished pop production on Privacy, sounding like a top-notch veteran through all of it.

The fifth and final album from Mac Miller is Swimming, a high point in a career cut tragically short. On it Miller makes use of slow-burning beats and atmospheric soul to talk about self-love and growth, always on vibe and dotted with beautiful moments of clarity. The spotlight has become brighter on the young artist's career since his passing, and Swimming is a bittersweet set showing Miller at his best.

Victory Lap is the debut album for Nipsey Hussle, but it has been years in the making. Long rumored and shelved in favor of mixtapes, the California MC carries on the grand tradition of the West Coast flow, echoing trunk-rattling rhymes of another generation, but elevating for a whole new era. The album features a deep guestlist including Kendrick Lamar, YG, and Diddy and is packed with grind anthems. Victory Lap is scrappy and sparkling, ​and a big debut that delivers on a talented MC's promise.

DAYTONA was the first and best of Kanye West's "Summer Album Series", a tight and lean picture of a still-hungry seasoned rapper. Pusha T doesn't waste a bar of his drug dealer turned CEO flow, taking aim at the up-and-comers, and notably beginning a beef with one of the biggest stars in the game. For all the headlines wrapped around the release, DAYTONA still stands as an excellent example of the exhilarating marriage between focused and inventive production and a quick-witted, ferocious rapper. While other releases tend to bloat for numbers, DAYTONA is streamlined to stand the test of time.

Travis Scott entered a new atmosphere with ASTROWORLD, fine-tuning his flow while experimenting and paying tribute on one of the most successful album's of the year. The hour-long tour of Scott's influences and twisted styles, produced some of the most exciting sounds of 2018. Bouncing between spacey snyths and soul samples, Scott has created a unique world to get lost in, while amazingly still managing to yield unlikely hits. ASTROWORLD was a giant leap towards the next level, crafting a style all his own and forcing the mainstream to look through his prism.

The 2019 GRAMMY Awards will broadcast live on CBS from the Staples Center in Los Angeles on Sunday, February 10th at 8pm.