We are only a few weeks away from the 61st Annual GRAMMY Awards, and a new set of names ready to be written in the history of music.

As music has become more collaborative than ever before, the Best Pop Duo/Group Performance category is commanding and filled with exciting examples of the magic that happens when artists cross genres and generations. Some of the biggest hits of the year are built on the strength of relationships, as two or more amazing talents come together to create something special and unique. 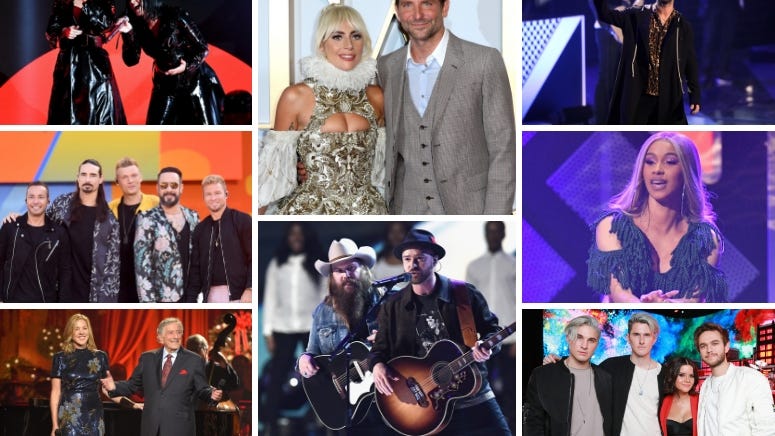 The time has come to make your voice heard and let us know who you think should walk away with the GRAMMY Award, but first a refresher on the nominees for Best Pop Duo/Group Performance.

This feminist anthem crosses generations to combine two powerhouse vocalists, as the two trade soaring spots and vocal runs against a futuristic stomping blues beat. This nomination is Christina's 20th and, the 2nd for Lovato, combining two of the biggest voices of the last two decades.

And with that, Backstreet was officially back. This infectious, timeless disco-infused dance floor anthem ushered in a new era for the group and gave them their biggest hit since 2005.

One of the highlights from the first full-length collaboration between these legendary musicians, Bennett and Krall breathe cool new life into a Gershwin standard. As the bassline dances beaneath them, these two are effortless together in a playful volley of vocals for a true classic.

"Girls Like You" is a perfect pop song, approachable and relevant with a hook that won't quit. This time around Maroon 5 added some extra secret sauce to the recipe, enlisting the pop culture supernova Cardi B to lend a few bars to the equation. Add in a video full of the world's most famous females and you have one of the biggest songs of the year.

It was a performance from a different award show that first brought Timberlake and Stapleton together, but the two became fast friends and set out to write together for Timberlake's Man Of The Woods album. Without planning, Stapleton hopped on the song of reflection and helped write the latest chapter for the duo.

Not many songs were as everywhere as "The Middle" in 2018. The song built steam all year, gathering groups of fans across pop, country, and beyond. After being recorded by several top-tier singers, they finally settled on Maren Morris as the perfect voice for the earworm anthem, and the rest is history.

Now the choice is yours. Vote below to tell us who you think will win the GRAMMY for Best Pop Duo/Group Performance, and be sure to see who wins as the 2019 GRAMMY Awards will broadcast live on CBS from the Staples Center in Los Angeles on Sunday, February 10th at 8pm.

Voting has unfortunately closed. Thank you for participating!