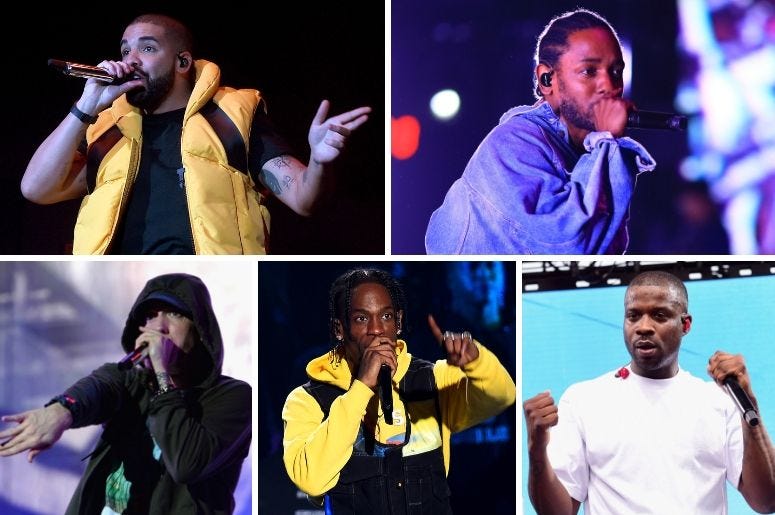 Five giant songs and the writers behind them will be honored at the 61st Annual GRAMMY Awards. The Best Rap Song category showcases five outstanding songs, with artists bouncing from headliner to feature, and writers and producers working with every corner of the genre.

With the awards closing in, we want to hear from you on which song should reign supreme. Vote for your favorite of the five and let us know who should take home the GRAMMY. But first, a reminder of our five nominees.

On a beat that was built by several producers, "God's Plan" shows off the optimism of Drake along a spiraling, feel-good bounce. The song became one of the most listened to of the year, and remains a force nearly a year later.

This star-studded affair became a standout from the Black Panther soundtrack, and a testament to Kendrick Lamar's ability to build bridges. A collaboration both in the booth and behind the board, the songs lives within the world of the film and stands ferociously outside of it as well. The unexpected left turn towards the conclusion is a spotlight on the skills of both Blake and Lamar, two artists unafraid of risk for the sake of art.

Eminem surprised everyone with the release of Kamikaze, taking aim at the industry and himself. Of all of the verbal gymnastics and cutting lines on the album, "Lucky You" stands out because of Joyner Lucas. The young MC is up to the challenge of Marshall Mathers, and offers his own blazing verse before Eminem returns to remind you why you're here.

In one of the 2018's most unlikely hits, Scott does the unthinkable and stops a Drake verse short for his own rhyme rampage. The ASTROWORLD rapper builds and destroys multiple beats on his way to one of the finest performances of the year. Along the way he forces you to play by his rules, and sets things off as he sees fit, in thrilling fashion.

"WIN" is a shot of sheer power, pushing into anthem status. A straight forward chest-pounding song, driven by the desire and flow of Jay Rock, dotted with victorious trumpets and hype courtesy of Kendrick Lamar. This is what swagger sounds like.

Now the choice is yours. Vote below to tell us who you think will win the GRAMMY for Best Rap Song, and be sure to see who wins as the 2019 GRAMMY Awards will broadcast live on CBS from the Staples Center in Los Angeles on Sunday, February 10th at 8pm.