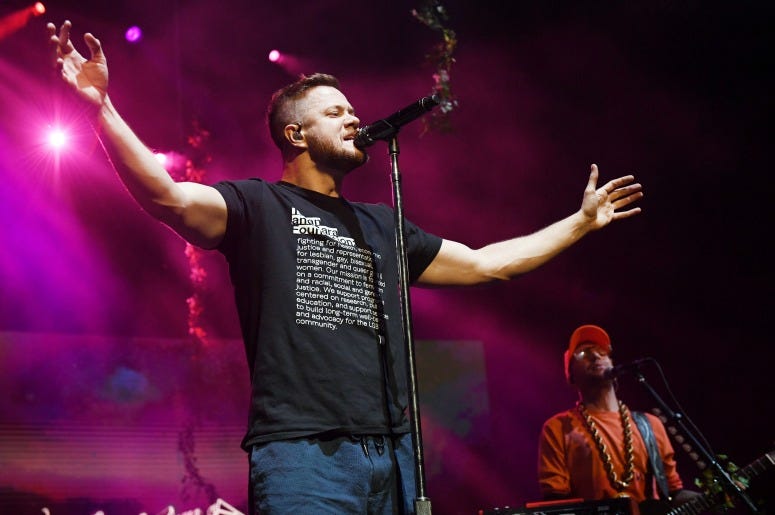 Before Clemson completed their tenacious title run by absolutely dismantling Alabama, Dan Reynolds and Imagine Dragons emerged singing from the shadows for a surprising halftime performance. The band played from Treasure Island in the San Francisco Bay near the National Title game, and invited along a special guest star.

After a "cutthroat" collection of songs from the Vegas band and their new album Origins, Lil Wayne stormed the stage for a frenzied and Imagine-infused version of "Uproar." Wayne paced the catwalk in a colorful coat, ripping through the Swizz Beatz assisted song while the band provided the backing. After his burst into the set the rapper retreated to the side, with Reynolds returning to center stage for "Believer."

The singer slinked and stalked the stage, before fireworks punched through the chorus. Surprisingly Lil Wayne returned for his own verse on "Believer", rapping "it's Weezy the Dragon, I link with the Dragons and we gonna get ratchet, no need for imagining."

The collaboration with Wayne is just the latest Hip Hop connection the "Natural" band has made, famously linking up with Kendrick Lamar at the GRAMMY Awards in 2014. They also worked with Logic and Ty Dolla $ign for a track on the Suicide Squad soundtrack in 2016. The "Believer" remix appears to more than just a one-off, as the band has also released a studio version of the collaboration.