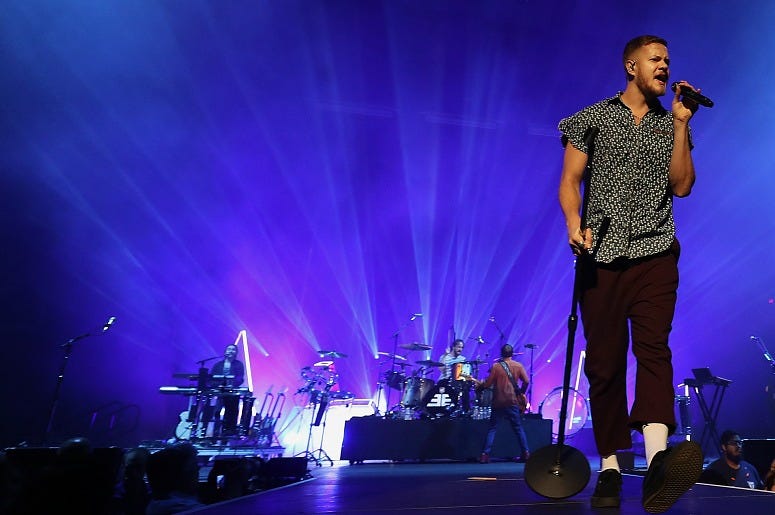 In the lead up to Origins, Dan Reynolds and Imagine Dragons were very clear about the connection their fourth album shared with their GRAMMY-winning, platinum third effort Evolve.

"We finished Evolve - there's a lot of clarity on that record, both sonically and I think just as a band - and we just kept creating" Reynolds explained last month. "So we had these songs that we created after Evolve, where we thought, we can wait a couple years like bands are suppose to and put it out, but then it's gonna be irrelevant to us cause in two years we're gonna be in a different place. So we just though well, this is a new world of music. Why don't we just put it out right now?"

Origins is thought of as a "sister album" to Evolve, one that shares a similar DNA but certainly has an eye for other things. While the previous collection was packed with self-affirming anthems, Origins in more concerned with relationships. Actually, more the dissolution and the struggles of a relationship, which is no doubt the personal dealings of Dan Reynolds bleeding in like never before.

On "Boomerang" he sings about a effort to exit but it's a love he can't quit, and on "Bad Liar" he speaks of the struggle to keep up the facade of everything being okay. Even the mirrorball-shimmering, slow skate vibe of "Cool Out" has leaving at it's core. There's a hopeful side to that story as well, like on the Mumford-plucking "West Coast" which takes a scenic walk through what the two mean to each other, or the confident strut of "Only" where Reynolds sings about his love's importance and ability to solve the struggles. Still the common thread is clear.

That being said, Imagine Dragons still take time to flex those other muscles. "Natural" is ubiquitous and ultra-popular already because of its stadium-sized, shout-a-long beauty. "Machine" which was also released as a single, likewise straddles the line of alt-edge and perfect pop sensibility. There's also the scatter-beat, industrial "Digital" that is a chaotic and fun take for the band.

Origins is obviously a different era for Imagine Dragons, one that can't shake the lovelorn sadness of a relationship, but it is still steeped in solid songwriting and sonic adventures. Origins is available everywhere now.