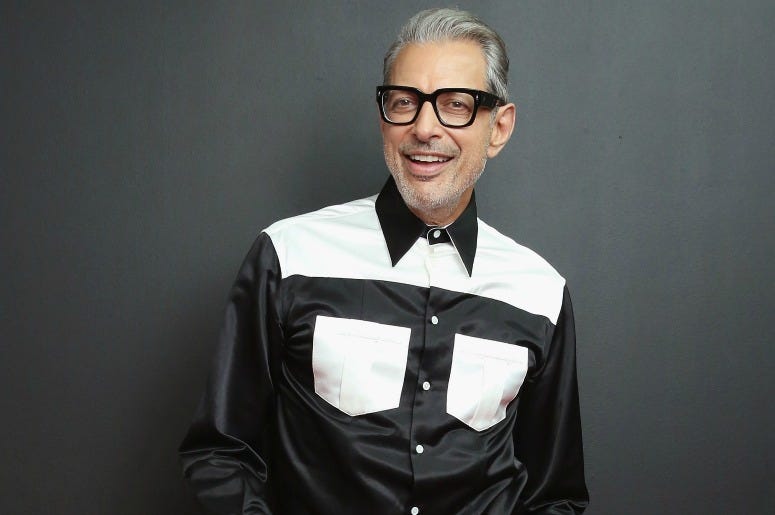 Wonderfully weird and insanely positive, Jeff Goldblum has recently set his smoldering sexy eyes on the world of music. The Jurassic Park actor recently teamed with his Mildred Snitzer Orchestra for The Capital Studios Sessions, an album which debuted at number one on the jazz charts. In addition to seeing a new side to the seemingly endlessly complex being which is Goldblum, the album has also afforded us all a chance to hear his thoughts on music.

Spoiler alert. He loves it. All of it. Some more than others, but Goldblum always manages to pick a plum compliment from even the thorniest of situations. During an interview with Music Week, the actor gave his quick take on many of 2018's biggest bands and artists.

While listening to the Arctic Monkeys and their song "Four Out Of Five", he exclaimed "Four Out Of Five? I give it Five Out Of Five Goldblums.” During Eminem's "Venom" he declared it to be "powerful, compelling, dark and foreboding. Finger on the pulse?”

Even on songs that seem to slip the grasp of complete understanding, Goldblum finds a way. While enjoying The 1975 and "Give Yourself A Try", Jeff called it a "wonderful song."

"I’m trying to apply what I think they mean. So far, so good."

Speaking of a finger on the pulse, Goldblum also enjoys the latest in pop music. For Cardi B's "I Like It" he explained "I like it... very, very much. It’s an awakening." And for "God's Plan" from Drake he noted, "this is the true joy in life – service, contribution. Long live Drake.”

You can find more info on his latest album here.