Juice WRLD's Death Race For Love is expansive and immersive, clocking in with 22 tracks and over an hour of music. It debuted as the number one album in the country, and gives the 20-year-old rapper the first chart-topping LP of his young career. You would think that the follow up to his breakout success would be a laboring and calculated effort, but according to the him, it only took 4 days to record.

With expectations high after the success of last year's Goodbye & Good Riddance and the inescapable "Lucid Dreams", Juice WRLD tells Vulture that he had to work past others opinions and trust his own skills to really get started. “I don’t want to say I’m nervous about it, but, like, a lot of people been in my ear about ‘this has to top the first album,’ and it’s like, I kind of had to get out of that mind-set" he told them in the days leading up to the release. "Especially because the way I record, I freestyle everything. If you think too much, you’ll start drawing blanks. You’ll start overthinking it. Second-guessing a freestyle is the worst. When you’re going off the top you’re supposed to just go. Just let the music kind of take over and flow.” 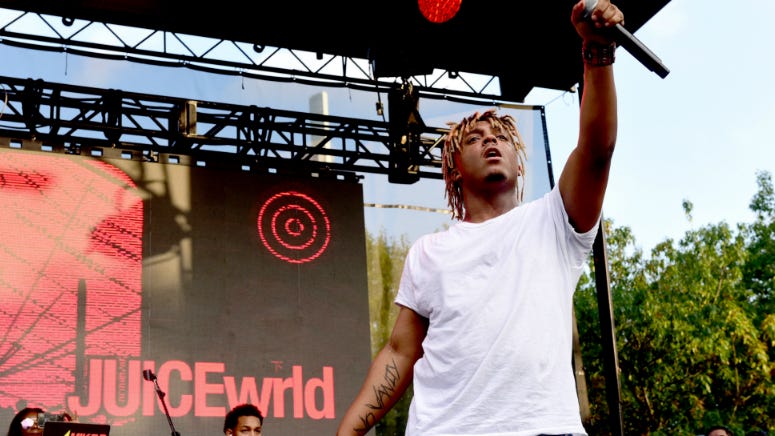 The flow is varied and sharp on Death Race For Love, as Juice WRLD continues to evolve from his emo rap beginnings and into a more defined entity of complexities. The sheer size of his second studio album allows him space to explore and wander into new margins of his original message. Shaking off the inclination to overanalyze, the "Robbery" rapper let it spill, recording the entire project in four days.

"It’s good to have goals and to keep climbing you know, but the music is gonna speak for itself. So just me realizing all those things, it kinda calmed my nerves about the new album. I just know I poured my soul into it. Every song but two or three of them on the new album are all freestyles, all made up in those four days.”

His comments are echoed in a tweet from last week in which he shrugs off the idea of outside writers helping him. "I don’t need anyone to write **** for me. I freestyled my whole album by my mf self. Not knocking any writers or artist who have them, but I just can’t sit here and not get the credit I deserve."