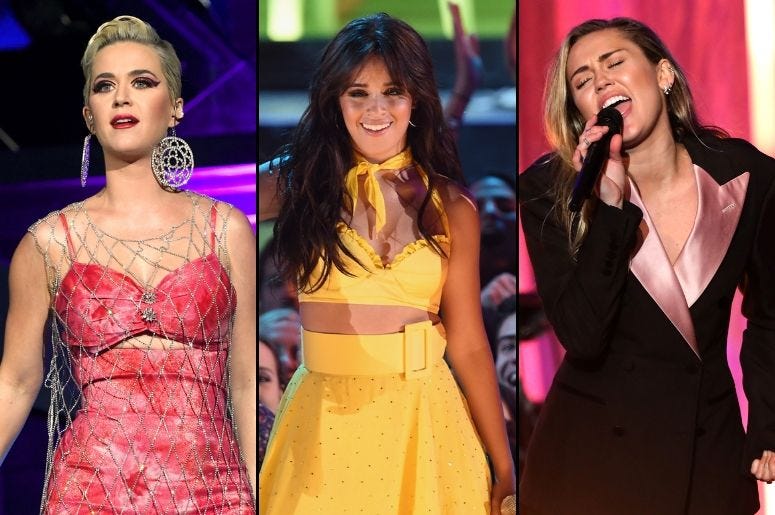 There will be new music from three pop powerhouses this week, which means a brand new soundtrack for summer and the severe loss of any ability to even.

Katy Perry, Camila Cabello, and Miley Cyrus will each be back with new songs by the end of the week. For Perry and Cyrus it is the first preview of a new era, but first it's a pop partnership from Cabello and Mark Ronson. The duo will debut a day earlier than the others, releasing "Find U Again" on Thursday.

you’ve been waiting for this one... FIND U AGAIN this Thursday. 💔 @camila_cabello

"Find U Again" is the latest cut from Ronson's Late Night Feelings album that's due out on June 21st. He's previously released singles featuring Lykke Li and Miley Cyrus herself. For Cabello, it's her second new song of the year and a potential preview of her sophomore album that she's been working on. The "Havana" singer has been in the studio crafting the follow-up to her self-titled smash for the past few months.

Miley Cyrus has different plans, with her EP called SHE IS COMING, coming out on Friday. So far the singer has debuted three songs live, and several clips of her eating fruit to promote the release. It's her first song since her work with Ronson on "Nothing Breaks Like A Heart" and 2017's Younger Now. The images are bold, and might signal a return to her hit-making ways of 2013's Bangerz. Whatever it is, it promises to be empowering and absolutely Miley.

Last but not least is Katy Perry. Little is known about the American Idol judge's new single, but "Never Really Over" is the singer's first solo song of 2019 and it is due out Friday morning. The swirling hair and bright orange outfit in the art is all we know about the song at this time, but it looks to be the beginning of something new from the Witness singer. Perry performed "Con Calma" with Daddy Yankee during the Idol finale earlier this month, and seems to have scrapped plans to take a break.

Three amazing artists and only one set of ears. It's going to be a wild weekend of music.