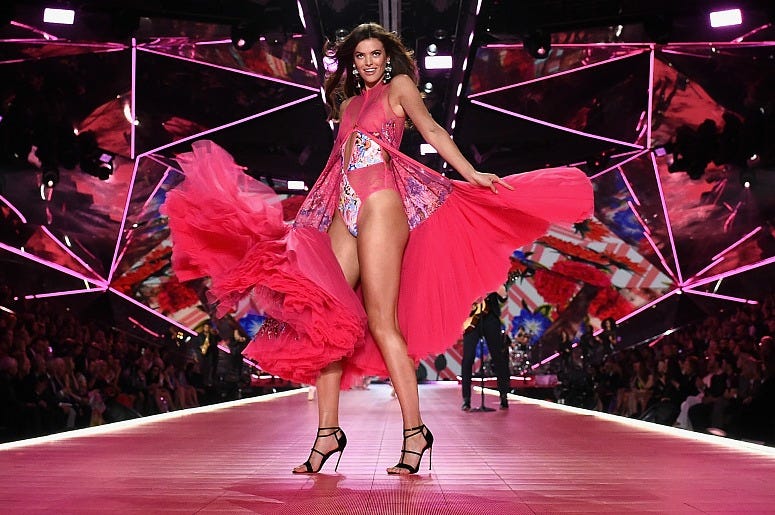 We are taking a timeout from doing crunches to talk about our favorite performances at the 2018 Victoria's Secret Fashion Show. Even though we are filled with dessert remorse, we absolutely loved the annual display of beauty and music, just in time to make us hate-eat our Christmas cookies and rethink our holiday wishlist.

There was a lot to love from Vic and company. The crowd was filled with famous support, with Adam Levine cheering on his wife, The Weeknd looking awesome and encouraging, and Kris Jenner living out her "thank u, next" destiny.

Celebs in the stands, Adriana Lima ending an era, and fierce fashion for days, but we were really here for the music. From the opening notes of Leela James crushing her Greatest Showman cover to Bebe Rexha putting the hot back in hot pink, the runaway was bursting with sizzling singers. It's tough to pick just three, but these were our favorite performances from the 2018 Victoria's Secret Fashion Show.

Halsey came as an actual angel to the VS show, shimmering in white and gliding along the stage. Her "Without Me" performance proved to be the perfect strutting soundtrack, and her speaking up for those who could not on the issue of inclusivity was a bold and powerful move that makes us adore her even more. See, angel.

A little rock n' roll is good for the soul, and The Struts were just the ones to bring the glam and a touch of danger to the runway. "Body Talks" was fitting and freeing for everyone to turn it up a few notches, and the black and silver is just our style.

Everyone turned in top performances on this night. Kelsea Ballerini and The Chainsmokers offered up a bursting bop of energy, while Bebe Rexha made us feel every line of "I'm A Mess." We could go on and on about Rita Ora, and everyone who took it to the runway, but we'll leave that for someone else's list. We're here for Shawn Mendes. Shawn Mendes doing anything. We would watch him make toast if he sang like that while he waited. The late night woozy vibe of "Lost In Japan" as the purple and pink flooded the arena, all the while Mendes smiles coyly as the models move by. Perfect. Also, we only eat toast now.

You can watch more from the 2018 Victoria's Secret Fashion Show here.