Vampire Weekend has unveiled the video for their song "Harmony Hall."

Directed by Emmett Malloy, who has helped direct videos for The White Stripes, Weezer, and Metallica, the clip shows singer Ezra Koenig cooking pancakes as a snake crawls across the counter. The kitchen demonstration is woven into shots of the band dancing, performing, and seated for the meal that has been prepared. If the snake look familiar, it's because the green coiled reptile has become the band's logo of late, appearing on the single's cover. 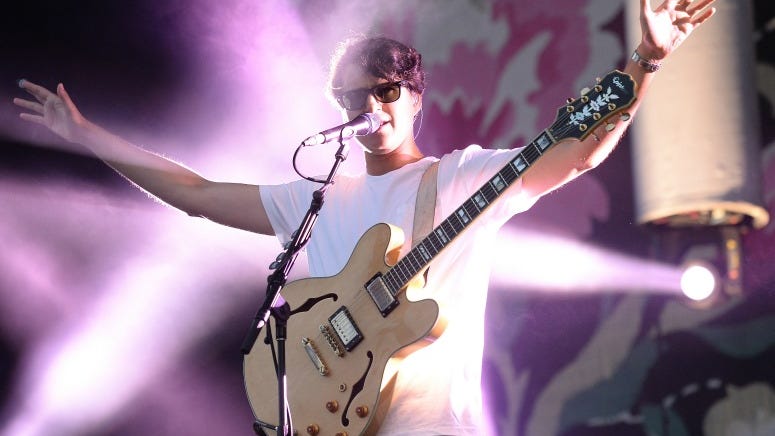 There is also a cameo from Jonah Hill, who appears at the end to sample the pancakes cooked by Koenig. The actor has been spotted recently directing a separate video with the band in New York.

"Harmony Hall" debuted along with "2021" last month as the band's first new music since Modern Vampires Of The City was released in 2013. Both will be featured on their album Father Of The Bride, due later this year. The band will continue to release tracks in pairs from the 18 track effort, with two more drops scheduled before the release of the album.

“Sometimes people ask me, are you nervous that you've been gone so long? And I might have been nervous three years ago" Koenig told GQ last month. "Now I'm at this place where I'm kinda like, if the record wasn't done and I wasn't excited to go on tour, I might even wait longer. Not only did I stop stressing about the fact that it had taken so long, I started to be like, This makes sense. Why do people release music more than every five years?"

In addition to the album, Vampire Weekend has recently announced a tour. You can find the full list of dates here.