Taylor Swift has joined Entertainment Weekly for her first sit-down magazine interview in three years, and has offered a few details and easter eggs about her upcoming album.

According to the piece, the recording of TS7 took just three months, as Swift carried with her the postive energy from meeting fans at the Reputation Stadium Tour. “I try not to go into making an album with any expectation” she tells EW. “I started to write so much that I knew immediately it would probably be bigger.” 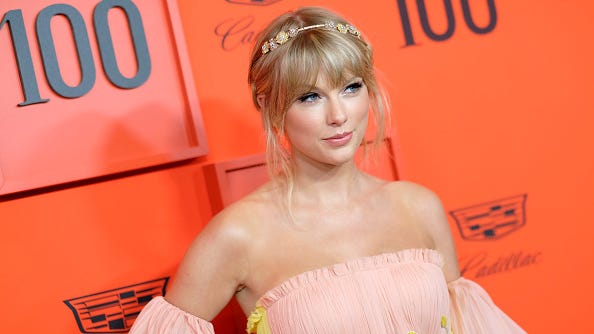 Swift hints at collaborators on the album, as they mention out her work with Brendon Urie on the lead single "ME!" They point out her "mix of old and new collaborators," as she appears on the cover wearing a Dixie Chicks pin. The group also appeared in a photo on the wall in the "ME!" video.

In a release, EW says that there are several easter eggs hidden in the pins of Taylor's cover story jacket. Could a collaboration with Law & Order or the cast of Friends be coming too? Probably not, but we're here for the Dixie Chicks.

We promise that you'll never find another like @taylorswift13! 🦋 The pop monarch is back with new music, a new outlook on life, and a current obsession (hello, #GameofThrones). We go inside the post-'reputation' world: https://t.co/WldOaWoVeM Story by @AlexJSuskind pic.twitter.com/nSIWDMwhpg

“There’s a lot of a lot on this album” she continues. “I’m trying to convey an emotional spectrum. I definitely don’t wanna have too much of one thing…. You get some joyful songs and you get the bops, as they say.”

Overall, it sounds like the experience of Reputation helped instill some new confidence in the already iconic star. "This time around I feel more comfortable being brave enough to be vulnerable, because my fans are brave enough to be vulnerable with me. Once people delve into the album, it’ll become pretty clear that that’s more of the fingerprint of this — that it’s much more of a singer-songwriter, personal journey than the last one.”

Taylor also mentions how much she loves your detective skills, hunting through clips and pictures, searching for clues as to what's next for the "Delicate" singer. "I love that they like the cryptic hint-dropping. Because as long as they like it, I’ll keep doing it. It’s fun. It feels mischievous and playful.”

You can read the entire talk from Taylor Swift and Entertainment Weekly here.