Taylor Swift teased plenty of guest stars for her "You Need To Calm Down" video and she delivered. With Ellen DeGeneres, Laverne Cox, Karamo Brown, Billy Porter, and half a million more, the clip unfolds as a trailer park Pride party and a celebration of the LGBTQ community. It's vibrant and victorious, with one giant trick saved for the end.

After a verse about celebrating all women with RuPaul tossing the crown in the air, Swift wanders around dressed as a box of french fries. Across the crowded food fight, she spots Katy Perry, wearing her hamburger dress from this year's Met Gala. Literally squashing the beef, the two come together and embrace.

The moment has been years in the making for the two, and gives more context to the "peace at last" cookie tray that Perry got from Swift last week. 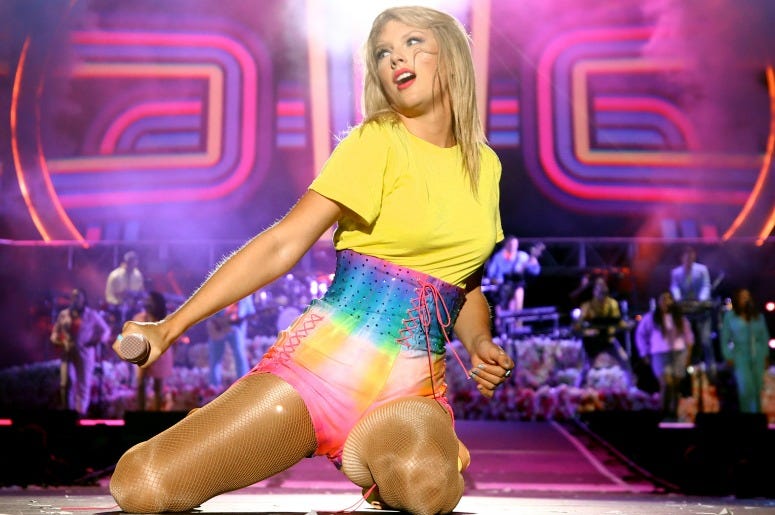 Taylor Swift Announces Album Details, Slays Hate on 'You Need To Calm Down'

After the reunion, the video swings back to the overarching message here, calling for stronger support of the LGBTQ community. "Let's show our pride by demanding that, on a national level, our laws truly treat all of our citizens equally." She then asks for viewers to sign her Change.org petition for Senate support of the Equality Act.

The song and the video are just the latest in a string of increasingly political statements from the singer, including a donation to a LGBTQ Activist Group in April.

Along with the release of "You Need To Calm Down" on Friday, Swift announced her highly-anticipated seventh studio album, Lover. The 18-track album is due out on August 23rd.