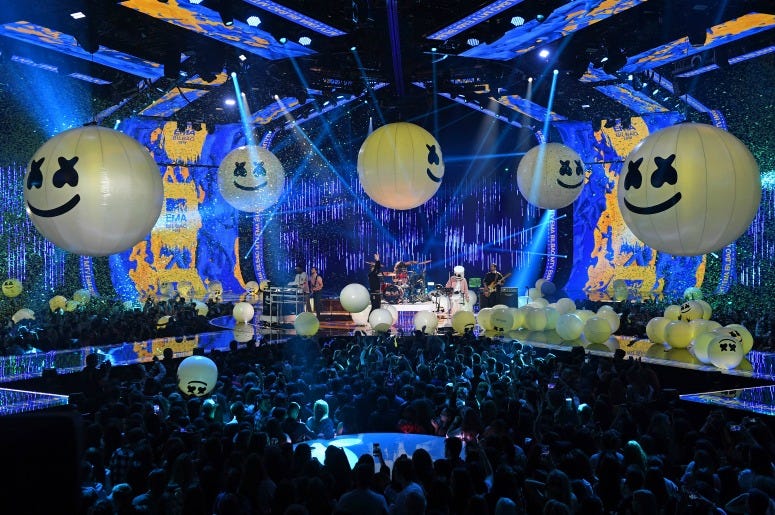 This weekend we got further proof that it is Camila Cabello's world and we're just living in it.

The "Havana" singer was the big winner at the 2018 MTV Europe Music Awards, taking home the trophy for Best Artist, Best Video, Best Song, and Best U.S. Act. That's similar to her VMAs victory list, where she won Video Of The Year and Artist Of The Year earlier in the year. Who run the world? Camila!

The international event was hosted by Hailee Steinfeld in Spain, and featured big performances from Halsey, Bebe Rexha, Jason Derulo with Nicki Minaj, and more. The night also featured a moving speech from Janet Jackson during her acceptance for the Global Icon award. These are some of the highlights from the 2018 MTV EMAs.

Literally in a "glass case of emotion", Halsey performed her latest, "Without Me", chained to a post in a wet transparent tank.

Rexha found a different way to clean up her mess, stepping out of a bathtub and leading a Thriller-like dance party of white-clothed dancers. Watch them crowd-surf the "I'm A Mess" singer back to the bath for an awesome performance.

We see you Jason Derulo! The singer opened his collaboration performance with David Guetta and Nicki Minaj, surrounded by an orchestra and with an overwhelming display of vocals. The guy's got some classical chops, and some dance moves which he quickly shows off as well. Minaj makes a golden entrance at the end for the win.

Marshmello pulled double-duty at the EMAs, starting with a candlelit take of "Friends" with Anne Marie, and then a full band party with Bastille for "Happier" to close the show.

All honors to the legendary Miss Jackson. who picked up the Global Icon award and celebrated with a medley of hits from across her career. Janet used her acceptance of the award to speak up for women around the world, saying "tonight I feel moved to speak for women’s voices who have been stifled.”

Other winners at the EMAs were Cardi B who scored Best New Artist, Dua Lipa who won Best Pop Artist, and Nicki Minaj who won Best Hip Hop Artist.